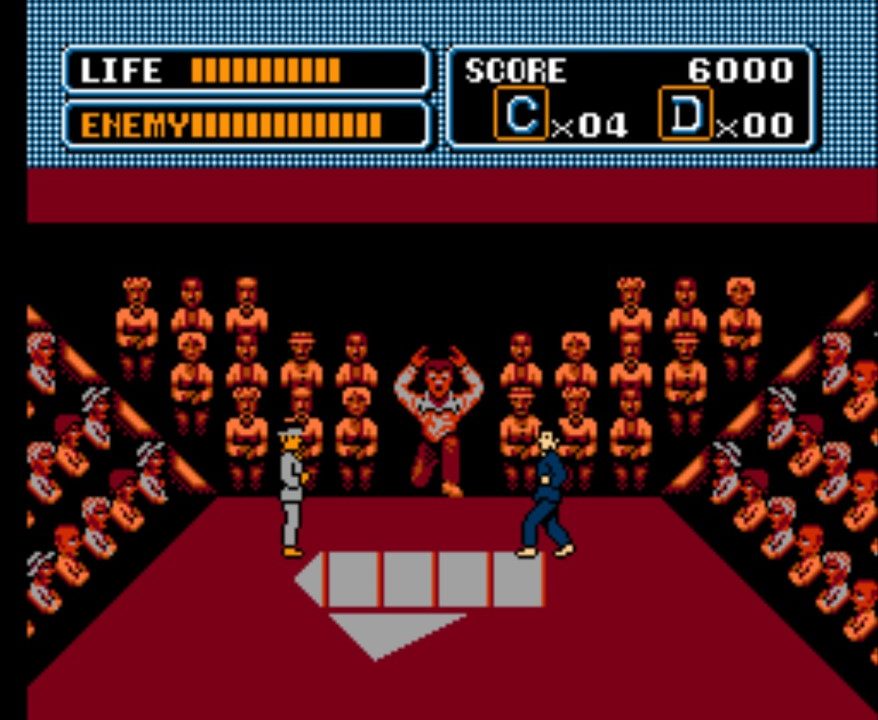 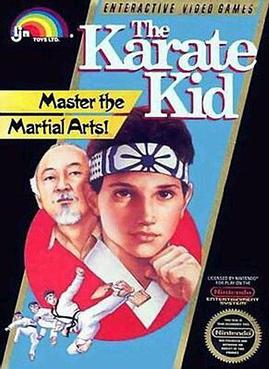 Love The Karate Kid movie? Awesome. Me too. It’s a classic!

I won’t even ask if you love The Karate Kid video game… it’s not a classic.

This may be one of the earliest movie to crap video game conversions ever. Don’t get me wrong, the game is playable and it brings with it themes and overtones from the first two Karate Kid movies, but that’s about where it ends.

The first level is the protagonist, Daniel LaRusso, fighting in the All Valley tournament. Except, the four rounds feature no opponents resembling the Cobra Kai bullies he faced in the movie. This first level will take you all of 90 seconds to complete.

You may never complete another level in the game after…

The second level whisks you away to Okinawa, where repetitive fights with the same animated goons will wear you out because the controls for this game suck. You’ll often get hit by the goons who you can’t always make contact with yourself.

B kicks. A punches. You get a special “crane kick” and “drum punch” you can pickup during three different bonus levels hidden in doorways you enter throughout the last three levels: a balance beam, ice block break, and catching flies with chopsticks.

None of them are easy.

You can pickup the special moves after defeating some enemies, as a “C” or “D” floats in the air for all of two seconds and disappears. Often, going for these special moves will cause you more harm than ignoring them, as enemies just don’t respawn, they auto-spawn constantly – the only saving grace is, I figured out its sometimes easier to outrun the opponents than fight them and have more spawn, as only two are on any screen at a given time!

The second level ends rescuing a girl above a tower. As with the jumping mechanic necessary to get around in the levels, you press up on the d-pad and hope the game responds with a jump that doesn’t send you to your insta-death.

The third level is pretty unique: it’s just the second level during a storm, with darker background textures and “wind/rain” that pushes items that hurt you and pushes you constantly throughout the stage.

Survive this and you reach the fourth level, which looks like it’s in desert mountains – the enemies look somewhat different and some brandish spears now and require an extra hit to kill.

True to the movies, the Okinawan goons will also throw vegetables at you sometimes.

But all of this is for nothing if you don’t save the girl at the end, who for some reason slides backwards during your final fight with Chozen, and if she falls off of the platform you have to start all over!

I hate to say this, but even if you’re a die hard fan of the movies and video games that suck badly, you may still want to avoid this title. It’s that frustrating to play! 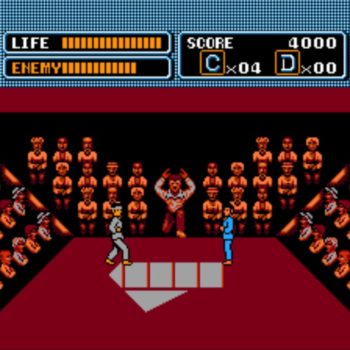 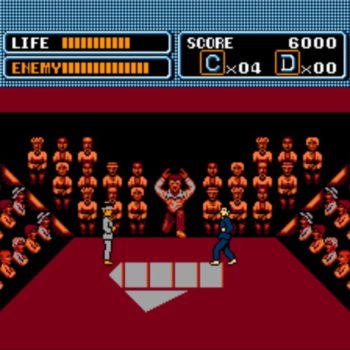 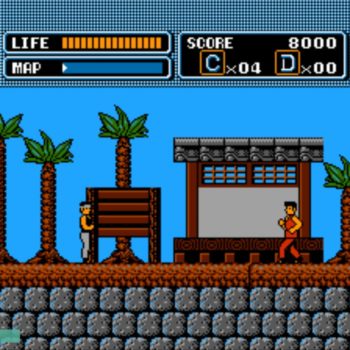 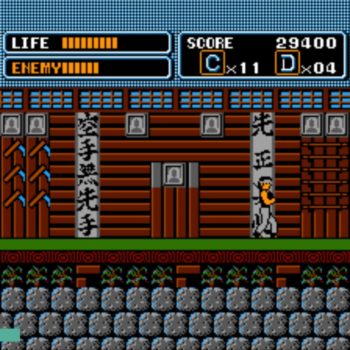 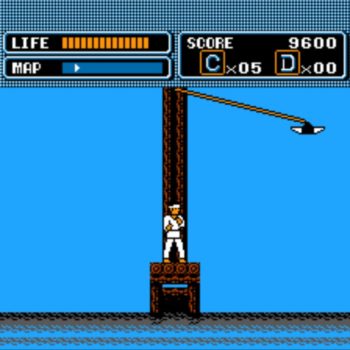 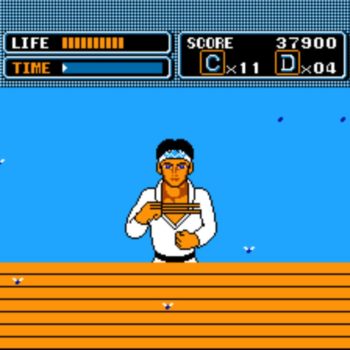 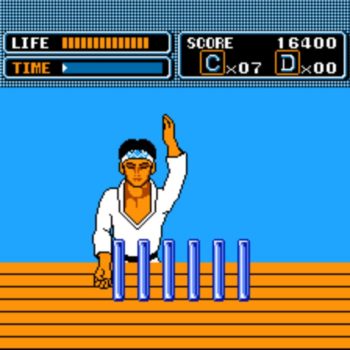 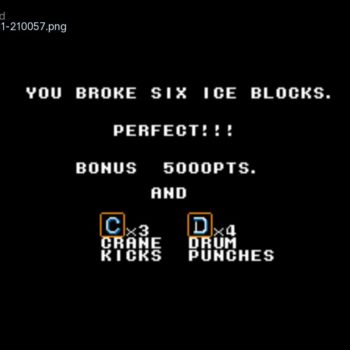 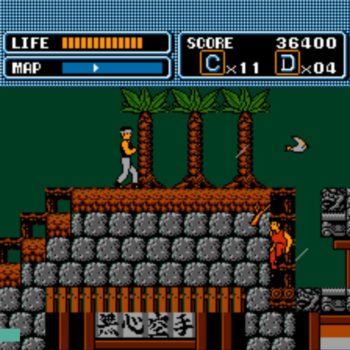 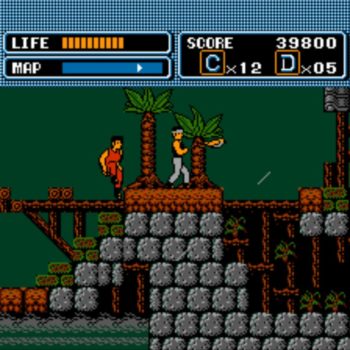 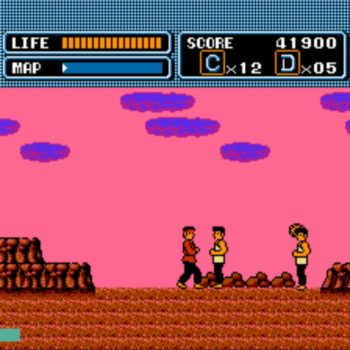 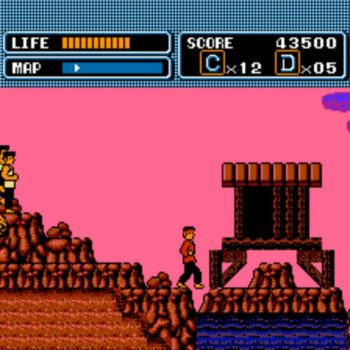 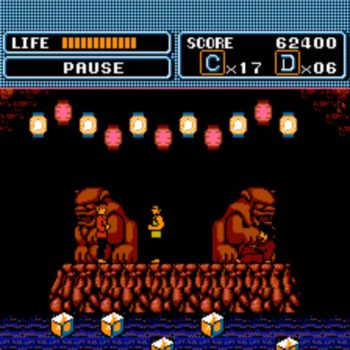 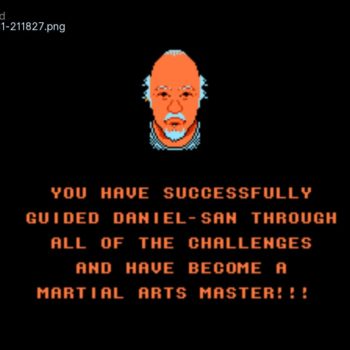 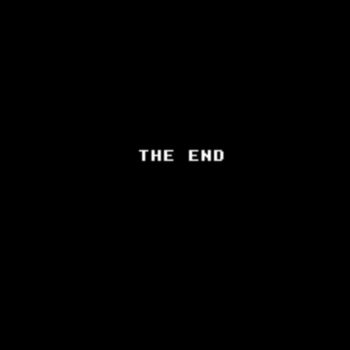