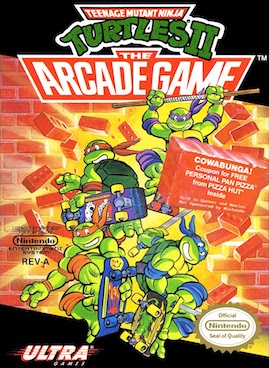 The NES port of one of, if not my favorite all-time arcade game is this one.

Now for the surprising news: I didn’t own this game until the NES was practically collecting dust. I received a handful of NES games well after I owned my SNES, probably because the games were cheap then. A near pristine version of this cartridge now sits in storage and honestly that’s where it was for awhile even after acquiring it.

I had played this game so much in the arcades that my desire to play it at home was practically nil. Imagine my surprise that many years later I would return to it and thoroughly enjoy the home console 8-bit translation.

First the basics: this is a beat’em up game, which in the arcades, was designed to make you blow through quarters rather quickly. Some of the cheap death stuff was altered for the home version, with a life bar at the bottom. The controls feature a jump and an attack button. You can combine the jump into a jumping diagonal kick that is fairly useful throughout the game and appears to do more damage than your regular attack.

The game is fairly straightforward. It was named TMNT 2 due to the original TMNT produced prior for the NES: a turd of a game that was missing many of the main characters and the charm of this cult classic. While the graphics are altered and more cartoonish in this 8-bit translation, I found that most of the concessions to work with the NES hardware weren’t just slapped onto the box. Sprits that were reduced in size, including the turtles themselves, just simply “work” within the environment.

Just about everything is redrawn, however, giving the game a bit of a different feel than the arcade version. However, the controls are tight and the gameplay is nearly spot-on. Even the timing of some events throughout the levels is identical or felt like it as to the game I came to play quarter-by-dollar-sucking-quarter.

Only a few things changed for the NES version. Baxter Stockman, a villain in human form only in the arcade, appears as “The Fly” in the home version replacing end bosses Beebop and Rocksteady: you still play against each of Shredder’s henchmen, but individually in earlier stages. Where The Fly is the boss now, you would’ve instead played against both henchmen in the arcade as it had a four-player co-op mode.

One stage is extended with a snow level in the city and one of the game’s two original bosses made only for this NES port. Another is like a Japanese-dojo level with a Samurai boss who has a levitating head.

I’m still unsure whether I like these additions. They give the NES game lasting appeal by not being as short of a game, which occurs as the difficulty and cheapness of dying are toned down compared with the arcade. Even the final encounter with Shredder, where he clones himself, is pared down from “3 Shredders” to 2 on NES: his insta-kill ray gun was also a no-show.

Yet one thing that’s really important is that the game is faithful to source material. That was my issue with the first TMNT. All of the bosses, including your never-ending run of minions in arcade version, and even The Fly for that matter, were (mostly) cartoon episode staples. From the Foot Clan ninjas to the mousers, it sure beat the first game’s “frog man” or “fire man” that were sorely out of place.

However, in this game, the polar bear or whatever ice creature boss and the samurai boss take away from that: reminding you of all of the awful and fake creations for the terrible TMNT 1 game… which lacks foot soldiers whatsoever, while this game has palette swap ninjas out the wazoo! That’s unacceptable considering how much source material is available from the cartoons, movies, and comic books, as well as the huge toy line.

I’d even venture to guess that the sound and graphics were fairly cutting edge for its time. This game even features heavy “Pizza Hut” advertising too. Packaged with the ability to actually play “the cartoon” with a game true in both feel and concept, this game lives on in re-releases even to this day as one of the greatest of all-time.

In all this is a port of a great game which is pared down in ways that it enhanced it for the home. I highly recommend it for anyone looking for an hour or two to burn one evening. 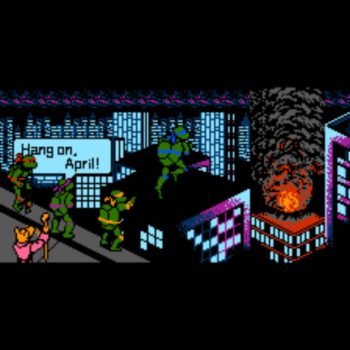 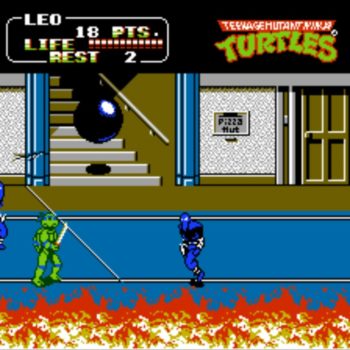 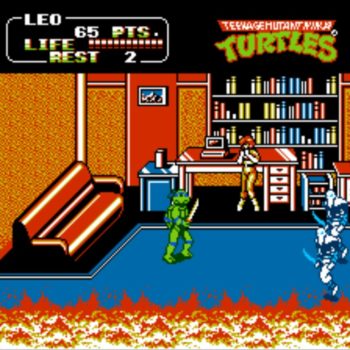 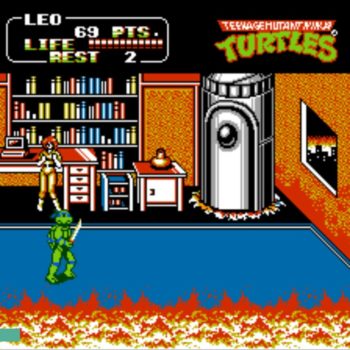 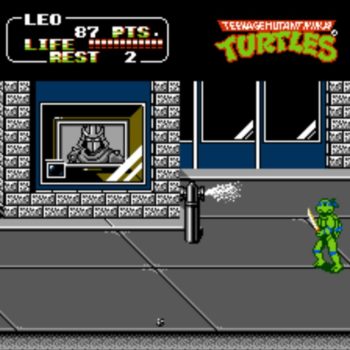 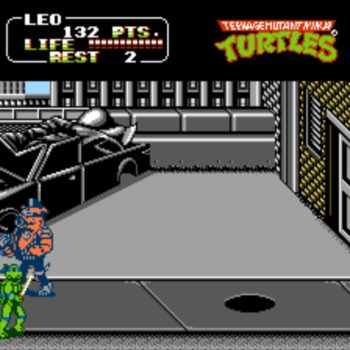 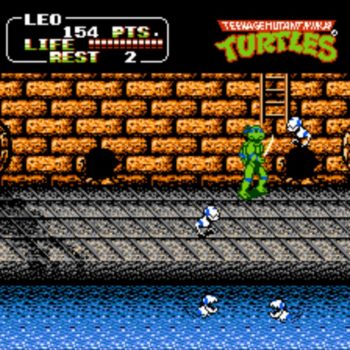 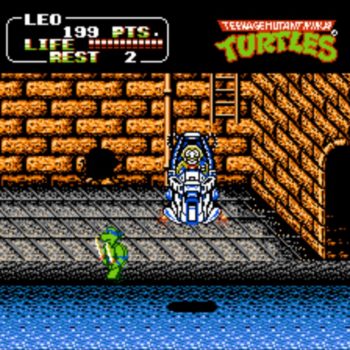 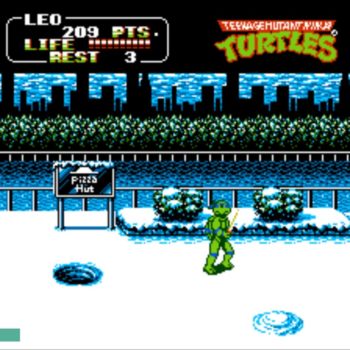 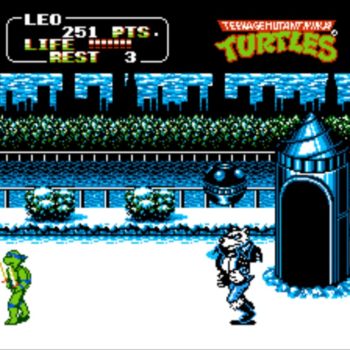 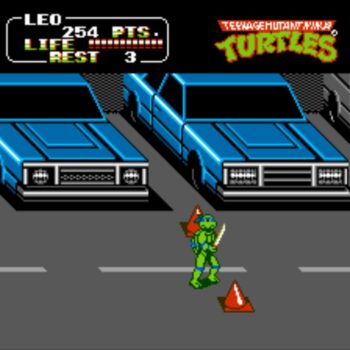 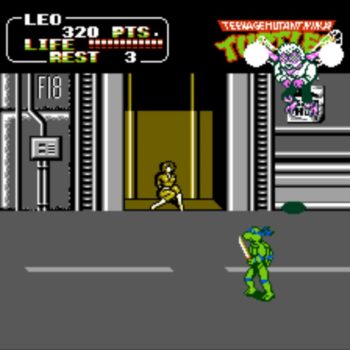 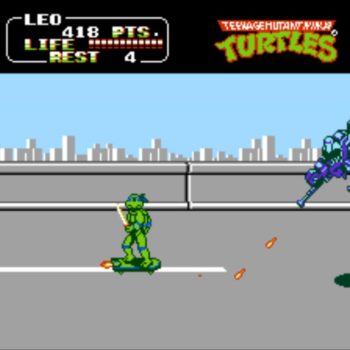 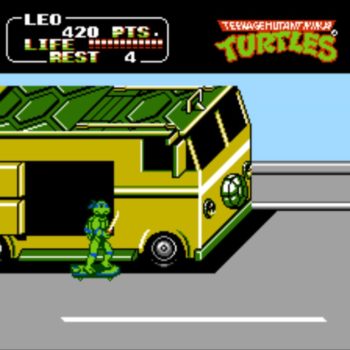 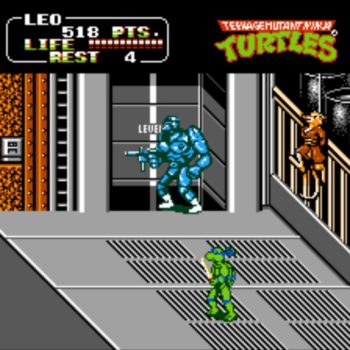 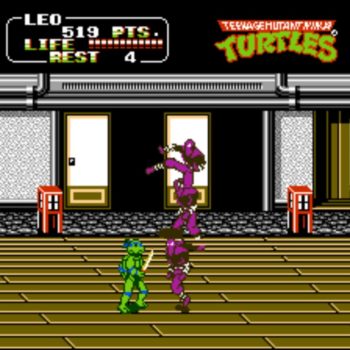 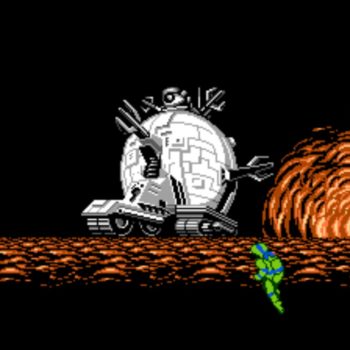 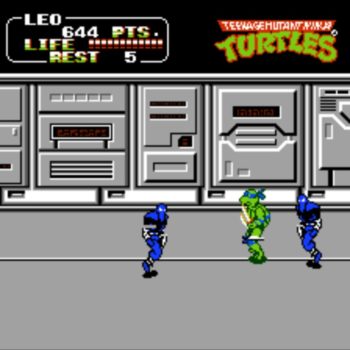 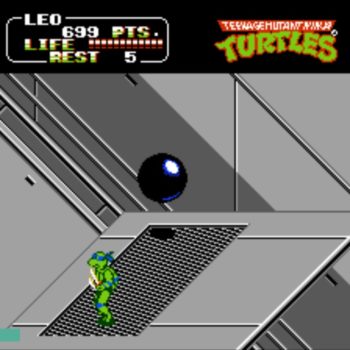 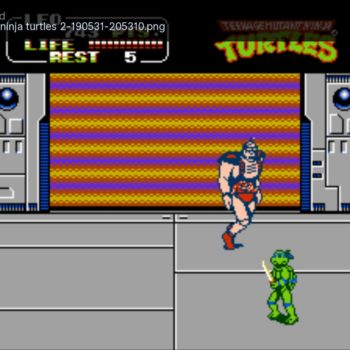 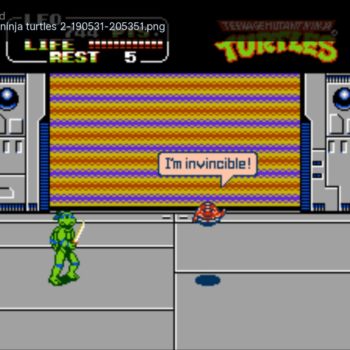 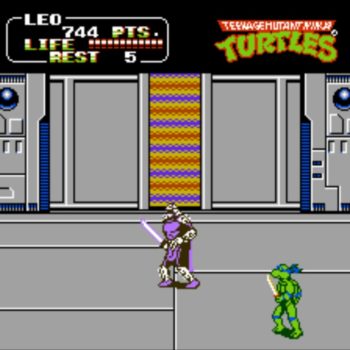 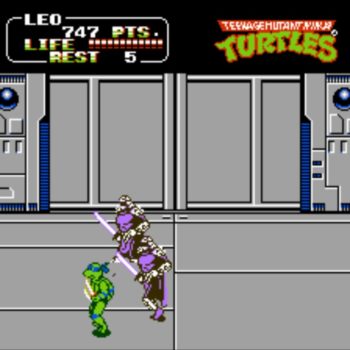 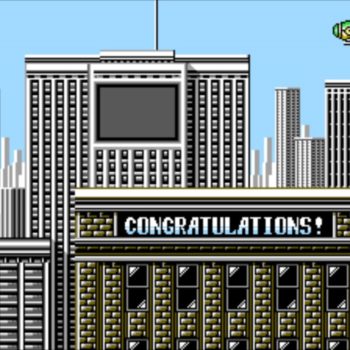