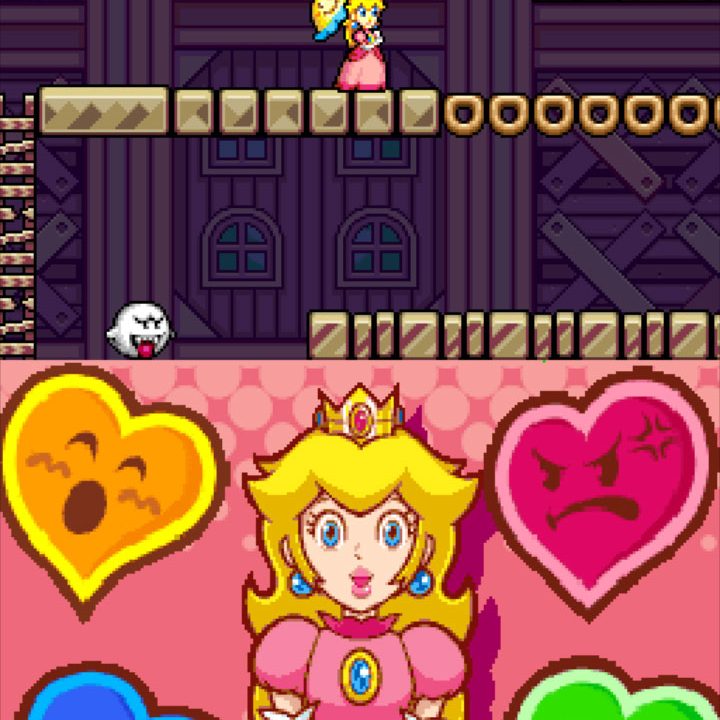 Mario games have a tendency of creating spinoffs which send the series in a different direction. Several examples of those are Super Mario Kart, Super Mario World 2 (which spun-off into many Yoshi games with the same mechanics) and Luigi’s Mansion.

Even Toad received a game all his own with Captain Toad Treasure Tracker.

Those are some examples of the many Mario series sister titles out there, but none is more of a sister to the series than a game starring the usual damsel in distress: Super Princess Peach.

Despite being one of the best-selling Nintendo DS games of all-time, I often receive blank stares when mentioning this title. I have a feeling it’s because the game was a departure from the main Super Mario Bros. gameplay much more akin to the American version of Super Mario 2, rather than the aforementioned titles, as it is still a platformer at heart which features many changes from your standard Mario gameplay, but not enough to be entirely memorable or groundbreaking.

The game begins with Peach venturing to Vibe Island, in a reversal of roles, to rescue Mario and Luigi. The island consists of your usual worlds (eight of them) featuring six levels and a boss level. For completionists, each level also has three toads to find/rescue which also factors into unlocking further levels/items. Mario fans will recognize many of the games characters, and of course, the usual protagonists: Kamek and Bowser.

Much of the style is also ripped straight from Super Mario World (including the infamous Ghost Houses), giving this game a mixed vibe (pun intended) of a mash-up of Mario games. I feel as if the developers wanted to mix several of these games together to create a new genre, however, I feel as if they failed to do so in the end product.

The game is colorful and fairly faithful to Mario lore. The departure comes from Peach’s use of a parasol (umbrella in laymen’s terms) which harkens back to her ability to “float” in Mario 2. Rather than use super mushrooms or fire flowers, Peach has four “emotions” which are needed to clear certain objectives. Those emotions are joy, gloom, rage and calm, all with different abilities.

For example, rage sets her on fire and allows her to stomp through certain blocks. With gloom, Peach sheds tears that can put out fires.

Those abilities are activated using the bottom screen of the DS, and when used, drain a special meter that must be refilled in order to use the special abilities.

Otherwise, without the powerups found in traditional Mario games, Peach reverts to hearts, a throwback to how Mario 2 operated with life versus death.

But one thing is fairly straightforward: it’s impossible to get a game over in Super Princess Peach. There are no “lives” and you simply restart a level over if you fail. In this way, the game feels setup for younger players, but there’s enough of a challenge in just the quirks of how this platformer operates to give it some gusto for more experienced hands.

Another nod to other games in the series occurs when “Perry” (the parasol – get it?) turns into a sub, can hook on zipless, or is used as a raft: any Yoshi players will recognize these side features while the sub feels like something straight out of the Game Boy’s Super Mario Land.

Overall the game isn’t necessarily great, but it’s not terrible by any means either. I believe most players would approach this game expecting Peach to run and jump as she did in Mario 2: and those who do will be sadly disappointed.

For others, there’s a new adventure in rescuing the Mario Bros. to give this a shot. But fair warning: it’s a game that’s very easy to complete with very little replay value. After you muscle through some of the longer, more boring stages, you will likely see why this game never received a proper follow up.

That’s the way I feel about “New” Super Mario Bros. Such an emphasis had gone toward turning everything into three dimensions that the classic 2-D side-scrolling platformer appeared to be lost in the shuffle.

Then, in 2006, Nintendo unleashed this behemoth upon us which has, in itself, spawned numerous sequels and also pushed other franchises to return to their roots (such as Sonic the Hedgehog and Spyro).

The best-selling DS game of all-time, NSMB picks up where Super Mario World left off, giving us a side-scrolling Mario adventure spanning multiple levels through multiple worlds with a slew of new features or freshly recycled ideas borrowed from a number of Mario games.

You’re back to collecting coins, breaking bricks, and stomping Koopa shells to save Princess Peach. Yet, this game nor the Mario concept doesn’t feel the least bit tired. Triple jumps, ground pounds, wall jumps… all of the 3-D goodies are here and while sprites have been ditched for 3-D graphics, it’s all set in a “flat” environment that feels every bit as genuine as the original NES Mario games but with a fresh paint job.

Some of the newer power-ups introduced make Mario huge, or incredibly tiny: or he can wear a blue Koopa shell.

This makes for some strategy and hidden areas only accessible with certain power-ups. Add collecting three of the star coins per level and the game has some incredibly sick replay value, where the Mario purist can’t put the game down until it’s 100% complete.

Honestly, if you’ve never played this and you’re a Mario aficionado, you should probably leave my website right now and track this down, because it’s one of the best titles I’ve ever played. (It’s literally that good!)

The Yoshi’s Island series originally spun-off of the sequel to Super Mario World 2: Yoshi’s Island, with a mechanic where Yoshi eats enemies and then shoots eggs while protecting Baby Mario throughout six worlds filled with various traps.

That original game used a special graphics chip to pull off a unique artistic style which has carried over into the other Yoshi games, including this direct sequel to Super Mario World 2, entitled Yoshi’s Island DS.

As you may have guessed, the “DS” in the title means it was developed for the dual-screen Nintendo DS handheld console, which had many games which lacked a real need/use of the second screen, making the console, at times, feel gimmicky.

Having played the Yoshi titles out of order as well, I was fairly burned out on the series. The N64 Yoshi’s Story was barely a “game”. The newer 3DS iteration, Yoshi’s New Island, was practically a direct clone of SMW2 and hence, got repetitive quickly.

The same could be said for latter editions on the Wii U and the Nintendo Switch, which felt like new paint jobs of the same old Yoshi gameplay, often dumbed down for a younger audience.

Imagine my surprise picking up this title that I had missed in the middle of all of the plodding and boring gameplay of some of those titles. Yoshi’s Island DS isn’t a gimmick, using both screens in a top-down double screen layout of levels that feel massive in scope, breathing new life into boredom of the series. Though the ability to see more is seen as a gimmick in and of itself (and the bottom touchscreen goes unused) it feels like a true title made for the DS and adds to the fun.

Seeing as this was the sequel of the series, I can now understand why other sequels were made, but an actual “DS 2” version needs to be done as this may be the standout title of the series. Joining Baby Mario on this adventure are Baby Peach, Baby Donkey Kong, and Baby Wario, with the ability to also control Baby Bowser at one point as well.

All of the baby characters have their own special powers, and with the ability to change them at certain stations throughout the worlds/levels, really opens up the uniqueness of this game and replay value, as you may have to go back through with a character previously unavailable in your quest for 100% completion.

Everything else, however, remains largely the same as the other Yoshi games, with a decent but not insurmountable challenge to beat the game.

I highly recommend this title if you enjoyed any of the other Yoshi games and feel it’s a hidden gem on the DS console.

Take a groundbreaking game which basically launched three-dimensional, free-roaming, open-space worlds in the video game genre and then up the ante.

That’s what Super Mario 64 DS is – not just a remake of Super Mario 64 for the Nintendo 64 but a launch title for the fledgling “dual screen” Nintendo DS console, showing off its own graphic capabilities when compared with its predecessor the Game Boy Advance.

All of the usual suspects are here: the game plays 90% like it’s N64 groundwork, but the few subtle changes are where the game really shines.

Rather than begin the game as Mario (the only playable character in the N64 version) players find themselves navigating Yoshi outside of Peach’s castle. Of course, the narrative is the same: Bowser did something bad to the Mushroom Kingdom and now you’re tasked with saving the princess.

Except, this time, you can control Mario, Yoshi, Luigi and Wario: each with their own special powers. As you progress through the castle, you must acquire stars – earned by defeating each level’s task. Each of those tasks is dependent, in this version, on which character you choose at times. As I mentioned, only about 10% of base game differs from the N64, but it’s this 10% where you’re forced to use Luigi or Wario in certain situations that makes this game stand out on its own.

Add in better, but still not quite sharp 3D graphics (hey, it’s still the DS) and the usual crisp audio, and the game is a pleasure to play – except for when certain cramped DS controls spoil the fun. (I already strongly disliked some of the precise jumps or mistaken back flips to my doom in the N64 original.)

Overall if you’re going to play (or replay) Mario 64 for nostalgia purposes, this is the title I’d recommend… yes, even over the WiiWare rerelease of the N64 source material. It’s just really cool to have some of the added perks with additional stars, minigames, multiplayer, and more.

Pick this one up if you’re a Mario fan for sure!