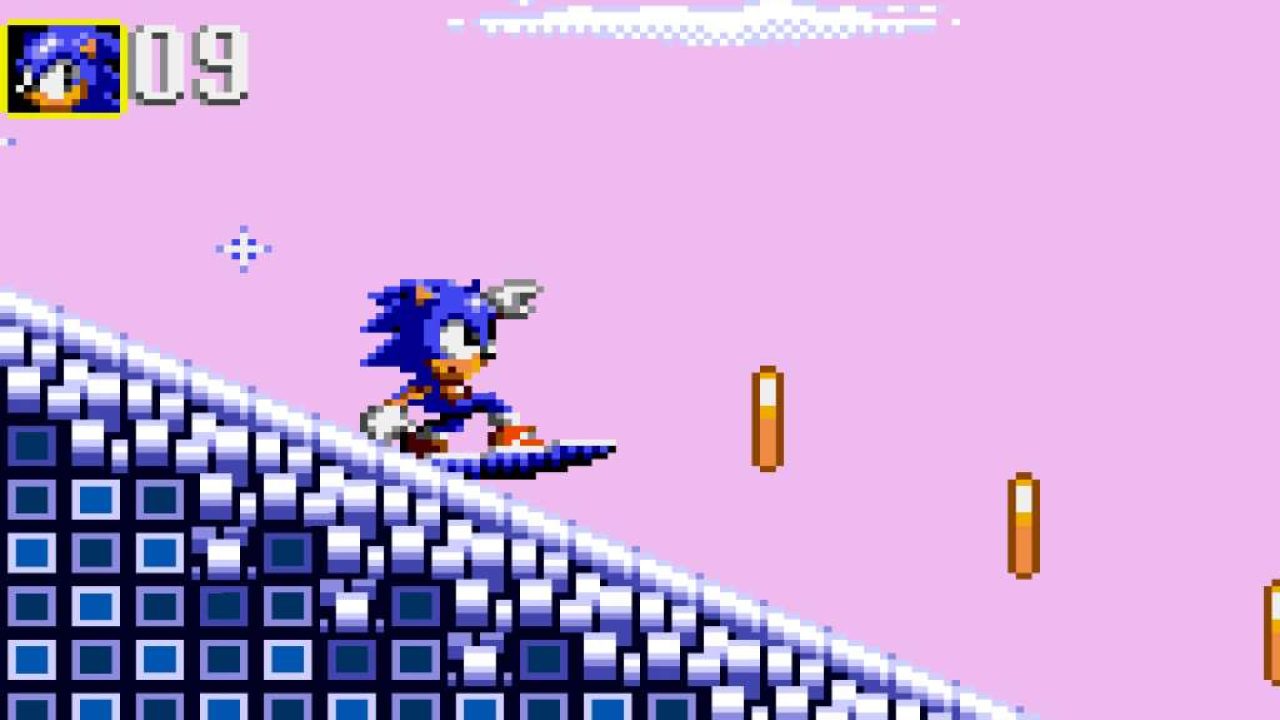 The Game Gear was Sega’s attempt to compete with Nintendo’s wildly popular Game Boy handheld console. As such, it produced some interesting results throughout the years.

The hardware, which unlike Nintendo’s offering, had a color screen, was based on the 8-bit Sega Master System. Because of that, many games shared similarities if not the exact same software between the two consoles.

Sonic The Hedgehog is one of those titles, which was the exact same on both 8-bit platforms. Subsequent sequels, however, were exclusive to Game Gear as the Master System was retired in various territories, including North America.

Five Sonic games were eventually published for the Game Gear, with Sonic the Hedgehog: Triple Trouble being the fourth: and worst.

I had previously praised some of these 8-bit Sonic games as clever platformers, original in ways to work around hardware limitations – such as there being no loops in “Sonic 1”, for example. However, Triple Trouble falls incredibly flat on its face as one of the more gimmicky and difficult Sonic games ever created.

All of the same premises exist: collect rings, stop Dr. Robotnik, and do so by moving rapidly through non-linear stages. You can play as Sonic or Tails in this game, as Knuckles makes an appearance after the recently released Sonic 3 on the Sega Genesis.

So, why didn’t I care for this game, you may ask?

To be honest, it starts strongly. Everything feels at home as a Sonic title. There’s even some added power-ups such as rockets and snowboards that appear to fit in the Sonic spectrum.

Then you get to the first boss battle and realize this game is stupid difficult due to cheap cheating mechanics.

Should you play beyond this the issues become worse.

After playing two acts of any given zone, the third act is a mini stage before encountering the boss. I assume this is designed this way due to load time and RAM limitation on the hardware.

No big deal, except the developers tend to hide rings on these stages. No rings? Then you die!

Yeah, it’s kind of like that, except then the acts get bogus too.

Clear paths are hard to decipher, and some of the boosted jumping mechanics become hard to pull off as well. By the time you get to the snowboarding level, you’re already fed up with falling into death traps, and hopefully you haven’t lost too many lives where you have to start all over.

A water level is just as frustrating, with the usual underwater air issue: Sonic drowns to death without air, but bubbles don’t automatically populate and the timer seems to be really fast too.

By the time you get through all of this you’d just as rather toss the Game Gear across the room than actually finish this game. In fact, I’m wondering if kids of yesteryear even had enough battery life to make it all the way through?!

It’s a shame, because graphically the game is impressive. The audio is also superb for its time and limitations. The controls, aside from the added quirks mentioned, are the usual Sonic fare.

But the “new” concepts brought in with the idiotic level and boss designs make this one of the more challenging Sonic games to beat. And that’s saying it lightly if this game could be beat with the way it was intentionally handicapped for a challenge, rather than making it a challenge.

Nearly all of the Sonic The Hedgehog games on Sega’s Game Gear were subpar efforts.

However, aside from the first one (which plays like a through and through 8-bit platformer and not really “Sonic”) Sonic Blast is the only other game worth anyone’s time.

At that, it wasn’t the bee’s knees compared to the Genesis counterparts.

The game play was far better than the previous Sonic iterations. (Which wasn’t hard seeing as two of them were downright unplayable.)

This game was short and sweet, and carried over concepts from the Genesis releases – but for some odd reason Sega’s developers chose to use faux 3-D sprites for Sonic and the enemies, on 8-bit tech.

It looks fugly at best and really distracts from the core game.

Sonic fans will no doubt want to re-live this, but for the common retro gamer you’ll be alright sitting this one out.

For the most part, Sonic the Hedgehog games on Sega’s handheld Game Gear console are a forgotten gem.

However, the 8-bit sequel to the excellent first Sonic game on the handheld quite frankly sucks.

That may not even be a generous term – and it’s also lame that Sega named the first and second games identically to their siblings on the Genesis!

The premise is the same: it’s a platformer. Collect rings (which you can recover some of after being hit, unlike the first game) and defeat the bad guys.

It’s the extras added to this game that make it awful. Sonic has an ability to smash through certain walls, but you have to know when and where to use this. Gimmicks such as a ridable mine cart and a hang glider are introduced too.

And that’s where the removal of checkpoints along with these gimmicks makes the game incredibly frustrating. The hang glider is impossible to use. Even in the case of using save states, several areas took quite the stitching together of well-timed pauses in order to continue across gaps.

If you die? Then you start over at the beginning of the stage.

The game is riddled with all sorts of cheap ways to die: random spikes you’d never know are there, impossible paths to backtrack, and you know right away something’s off because Act 3 of the first Zone has Dr. Robotnik carry you to a hillside a la the Sarlacc Pit in Return of the Jedi, where you avoid sliding to your instant death while other instant kill bombs bounce down the hill toward the, um, enemy.

The very next Zone sees you nearly meet your maker as soon as it starts, with bridges that collapse and spikes at the bottom of the pit.    Giant air bubbles to float around to higher areas of certain levels offer a pretty crappy “challenge” too. Another underwater level starts with next to know air bubbles in which to avoid death either.

It’s quite shameful that the developers thought any of this was a good idea, but it gets “better” when you realize you cannot rescue Tails unless you follow a specific path of getting all six emeralds – one is hidden within each of the five zones.

In the sixth zone you must earn it by beating the zone’s boss and hopefully, you did well and your game doesn’t end right there – that’s right, if you don’t get the emeralds, you cannot access the final zone and rescue Tails.

Several of the bosses are very challenging in a sense of there’s not enough screen real estate to properly battle them, leading to more cheap defeats and having to do a lot of work over again.

If you read my part about the gimmicks above, then you can sense the pattern of wanting to thrown the Game Gear across the room. (One zone is appropriately named “Gimmick Mountain” in what may be a nod of how craptastic this game is!)

Another consideration in this era of playing the game versus back in the day: I’m not sure how anyone had enough battery life to actually complete the game unless you were a ridiculously good pro video game player.

Hard games were a way of life for an 80’s child growing up, but dumb and buggy games are another story. I only recommend someone check out this game to see the insanity for themselves. Otherwise, this is one of the Sonic games you can definitely skip.

Well, well. This was a quirky little find.

For those unaware, Mega Man’s developer, Capcom, had been an exclusive partner of Nintendo’s from way back when the NES launched. Following Sega’s successful market penetration with their Genesis, Capcom broke that exclusivity by releasing games for both, the Genesis, and Sega’s handheld “Game Gear”.

But that’s not the only reason this game is “quirky”. As the only Mega Man game on the Game Gear it mixes elements of it’s NES siblings. Due to hardware limitations, only two of Mega Man’s “buster” shots are on screen at any time (rather than three in other games) but the charged shot does more damage. The game also feels faster, with not only MM but the robot master bosses and even jumping or climbing ladders.

Like the Game Boy game, the small screen makes it impossible to find platforms below you, so you often fall to your death. Unlike the Game Boy, the color graphics really pop. (I may even prefer this to the NES games honestly.)

The game’s difficulty is about what you’d expect, with Capcom pulling cheapshots all over. Overall, the main concepts are pulled from the NES MM4 and MM5 so it’s a blend of both games, yet an original title.

However, the campaign is short. As a handheld title, there is only four main robot masters (rather than the usual eight) plus another two in Wily’s Castle (which is also an abbreviated tour).

Regardless, this title holds up as one of the more solid Mega Man titles of the 15 I’ve played so far!

I want to get this out in front: the Game Gear versions of Sonic the Hedgehog are not the same titles which were originally seen on the Sega Genesis. The confusion lies in the not-so-original naming scheme. For whatever reason, Sega published the titles under the same exact names (in most cases) as their Genesis siblings. Therefore, there are two Sonic the Hedgehog titles, however, they are not the same.

To further muddy the waters, there are also two editions of this same Sonic the Hedgehog “not Genesis” title, which were ported to both the Sega Game Gear and Sega Master System.

Obviously, the game didn’t have the same visuals as the 16-bit Genesis version, but even in the 8-bit world of the Game Gear (and the Master System, which is near identical) this title holds up very well. In fact, to the uneducated, had you handed them the 8-bit Sonic first and then had them play the 16-bit Genesis version, they’d feel like a natural progression in the series.

However, the Genesis version released six months earlier, making it the first in the series.

A version of Sonic the Hedgehog was developed by Ancient and released in late 1991 for Sega’s 8-bit consoles, the Master System and Game Gear. Its plot and gameplay mechanics are similar to the 16-bit version, though some level themes and digital assets are different and Chaos Emeralds are scattered throughout levels rather than special stages.

Gameplay as a whole is simplified; the level design is flatter and has a larger focus on exploration, with no vertical loops, and Sonic cannot re-collect his rings after being hit. The game has a different soundtrack composed by Yuzo Koshiro, which includes adaptations of music from the original version.

It was the final game released for the Master System in North America.

While this may seem like an oddity, it’s definitely worth playing. The content isn’t a ripped-off version from the Genesis. The two games share similarities, just like Mario games have over different platforms throughout the years. It also has enough original content to make it feel fresh, even though it’s a short game.

This first version is an excellent 8-bit rendition that feels like a prequel to the Sonic series and therefore, one I recommend any retro game puts on their bucket list.