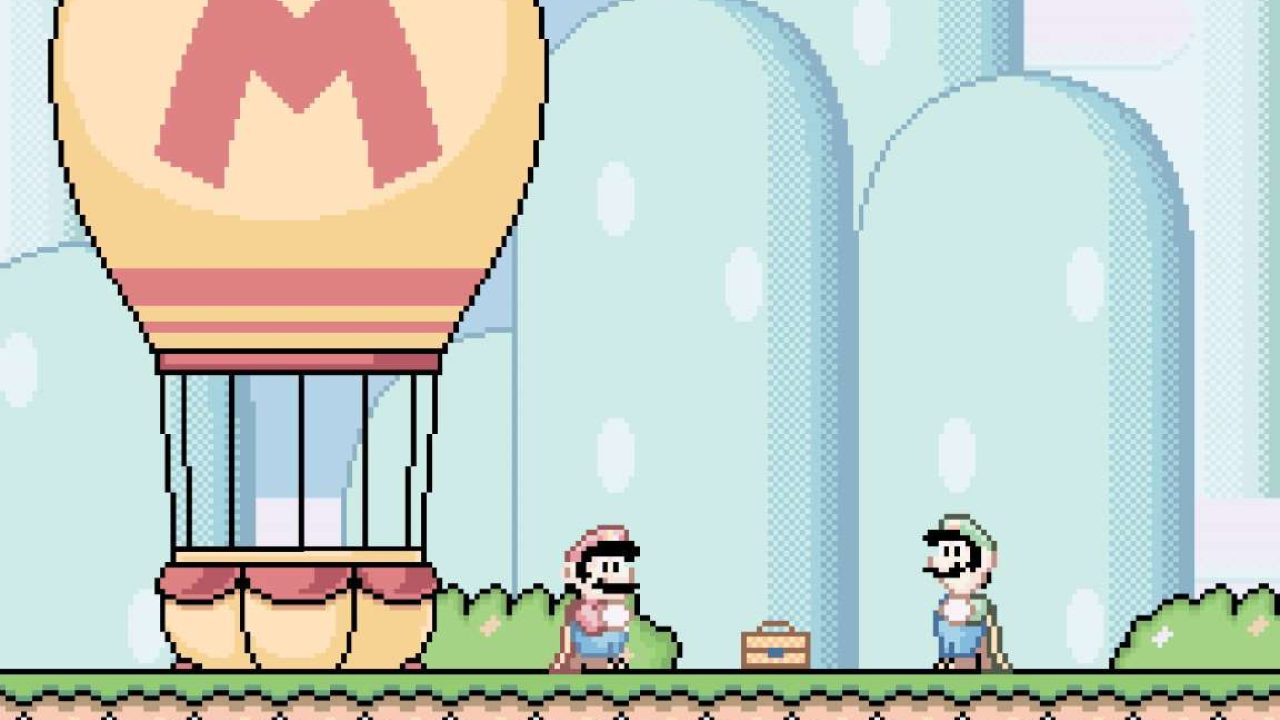 It takes a lot for me to be disappointed in a Super Mario game. And for the life of me, I couldn’t figure out why it took me so long to play this one, since I had (mostly) enjoyed the other Super Mario Advance GBA ports.

Well, it looks like I’ve finally been letdown, this time by the Super Nintendo just being that darn good.

The Game Boy Advance’s take on Super Mario World isn’t inferior, but it does struggle with a lot of items that are hard to turn away from if you’re a fan of the SNES original – which I consider to be one of the greatest games ever made.

For starters, the colors are washed out due to the lack of color depth on the GBA hardware. The Mode 7 scrolling backgrounds are also changed in most scenes, giving the game a very dry and unappealing aesthetic. Tinny audio changes that downplay the classic soundtrack, along with the lack of the extra X and Y buttons on the console, really underscore what is a tremendous game otherwise.

Yes, Nintendo went ahead and played around with this, as they did the other Advance Mario games too. However, the changes aren’t to the same level as what they did for Super Mario Bros. 2 or 3, with no new levels and nothing much of substance here, other than changing sprites to align with the other games…

That is, unless, you actually want to play with Luigi, who has been 100% altered to be his high-jumping, slow and slippery-footed self. (It’s the change that no one really asked for – does anyone play with Luigi?)

There are a few extra cut scenes at the beginning and end, and the message boxes, I’ve been told, have been increased. Oh, and a list of levels on the map screen, because, well, I don’t know why that’s needed!

I know this game so well, that the only thing I noticed that was different, and somewhat neat, was that the Top Secret Area (above the Ghost House in World 2) is now a hill instead of just a dot on the map.

Is this game really that bad though?

It just suffers from the same lack of screen real estate you may have with other TV to handheld translations. Otherwise, it’s still the great game play and depth as the original.

I’m just that much of a purist when it comes to SMW that I would prefer playing the original over the squeezed down version with very little changed for the better. You may find it’s the same way should you feel compelled to play it.

The fifth installment of Mortal Kombat was the first to not be released prior in the arcades; a dwindling and almost extinct concept for today’s gamers who didn’t have the theater-to-home experience with gaming as we do with film.

Deadly Alliance takes us on a journey that actually had me depart the series. I grew up on the 2-D motion capture actors and cheesy inspiration of Enter the Dragon and Big Trouble in Little China. When the series moved entirely to 3-D with Mortal Kombat 4, I just found the polygonal artwork to have lost some of the feel that made Mortal Kombat special.

Coming back to this game years later, my feelings haven’t changed so much. Fighting games had become incredibly cliché and Mortal Kombat started to lose steam to true 3-D fighters, such as Soul Blade/Caliber, Tekken, DOA, and others that arrived on the scene.

It felt like Midway was playing catchup and also lost its originality. Fatalities had long been overdone by the time Ultimate Mortal Kombat 3 was released, for example. Blood and violence were not the same shock value by the early 2000’s, with DOA’s top-heavy divas even getting a volleyball spinoff not even two months after Deadly Alliance released.

As such, we see these subtle differences show up in DA, as the characters bounce or jiggle, I should say, much like the other games noted. And fatalities were now limited to one per fighter.

What is this nonsense? Even MK2 had several ways to finish off opponents including multiple fatalities! Stage fatalities, like the famous iterations of “The Pit” are missing too.

This skewed me away from MK as the gameplay in DA is a lot different than the previous MK games also.

While MK4 had side-stepping, it felt more natural than tacked-on in DA. New fighting styles supplanted picking up any random fighter and just going to town – each character has three styles, one of which includes a weapon, akin to my eyerolling least favorite addition to MK4.

There are some other modes tossed into the fray, including Konquest and The Krypt, which are mainly there to make it see like there’s more to the game than there really is. Fans and completionists will go for it, but it was a nothing burger for me now or then.

However, the one redeeming quality of Mortal Kombat has been the depth of their roster. Nine new characters, as well as two secret ones, round out a total of 11 new combatants – though some of them seem to have had some lack of inspiration. (Frost? Did we really need a third Sub-Zero/female ninja clone or another cyborg/robot warrior?)

Yet, I will admit that the new characters are a huge improvement over the truly uninspiring ones in MK4.

Even Mokap and Blaze, the hidden characters, are somewhat cheesy by this point in the series.

Yet, for those cringey spots, Moloch and Nitara are actually pretty cool.

The returning cast is a decent who’s who of the series, including stalwarts such as Scorpion and Sub-Zero (who the team may never live down removing from MK3) plus more originals such as Reptile, Raiden, Kano, Johnny Cage, Sonya Blade and Shang Tsung.

However… the devs still didn’t learn their lesson from MK3 anyway and left Liu Kang out of Deadly Alliance. (How?!)

In summation, I feel as though the classic game bears little resemblance where it evolved to. That happens with different game series and I’m okay with it – but I don’t have to like it. At the time it felt like MK was trying to compete with other 3-D fighters and sacrificed quite a bit of what made it a cult classic in the process.

For as good as Star Wars Episode 1 Racer was on the N64 (and also the Dreamcast), Racer Revenge is not.

Don’t get me wrong: if you only had a PlayStation 2 and this was your opportunity for some podracing action, this game captures the feel of Episode 1 Racer. However, as a sequel to that game, it feels completely rehashed with some annoying additions to it which take away, not add, to the game.

First of all, the graphics and courses appear to be totally lifted from the first game. And not in a good way. I understand PS2 titles were somewhat more advanced than the N64, but put this sequel up against the Dreamcast’s version of the original and it looks unpolished.

Worse, the levels feel like legitimate rip-offs of the first game, except they also feel shorter or “tighter” with less room to maneuver. That’s important as this game makes use of a “damage” bar which drains as you hit obstacles or other racers, many of which commandeer large vehicles that you can’t get around or you get stuck too… and hit more obstacles… and crash.

But when you crash in Racer Revenge, your race is completely over. No respawning like the original! Back to the title screen for you, as you wait for that or another race to load.

This wouldn’t be so bad if, it wasn’t so cheap. The way you end up losing feels like Mario Kart on steroids at times and really weakens the fun of playing the game.

Add to it a bounty style system with “taking out” other pods, and well, just suck the fun out of this game and getting upgrades for your racer!

As for the sound, an announcer quips his favorite parts of the tournament, even mentioning Mos Espa is his “hometown”. It sounds great until you get to playing the game, where the same 2-3 lines are recycled constantly throughout! It’s enough to make you want to mute the game, which is a shame considering the grandiose of the Star Wars soundtrack lying underneath.

If this is your only experience with the Racer games because it’s a PS2 exclusive and you had no alternative, you probably wouldn’t notice these criticisms. However, the only thing seasoned Episode 1 fans will notice here is a frustrating set of tracks and controls, and a much older Anakin Skywalker to sell that this game is a follow up to the original.

It took me awhile to beat this one, but I finally came back around to the TimeSplitters series, with the game I felt was their best effort: TimeSplitters 2.

As with the original, much of the development team was carried over from former Rare employees who worked on Goldeneye 007 and Perfect Dark for the N64. Unlike the original, this game kicks down the door with sharper graphics (especially improved menus that don’t look generic like the launch title did) as well as playable characters, graphics, and much more.

Multiplayer on this was also great, and of course, one of the groundbreaking features (for a console) was the ability to create your own maps.

In all, I forgot how solid of a title this game was. I’m glad I revisited it and if you’re a retro gamer looking for a good FPS with that old Goldeneye feel, you’d be hardpressed to find one better than TimeSplitters 2.

A reissue of Super Mario World 2: Yoshi’s Island for the GBA, SMBA3 (love these acronyms) makes some slight adjustments for the small screen while also cleaning the game up.

One of the most notable changes is playing with shoulder buttons, as the GBA handheld only had two face buttons (B & A). This is actually not a big change and seems “right”.
The Yoshi sprite has also been updated from SMW2 and looks cleaner. Animations don’t stutter like the previous Super Nintendo version, which really (REALLY) pushed the limits of that console.

Another update is a real clock, for when you lose baby Mario (the SNES version counted half seconds while this update uses full second increments). That helps for a less frantic but still challenging game.

Everything else is still here, but in true “Super Mario Advance” fashion Nintendo added additional stages which are only available in this title. Six “special” levels are unlocked after beating the game, and they are unique and challenging, which is a welcome addition to a title which has spawned several sequels.

In fact, if I were to redo my bucket list of games, I’d probably play this version over the original. It’s that solid of remake/reissue.