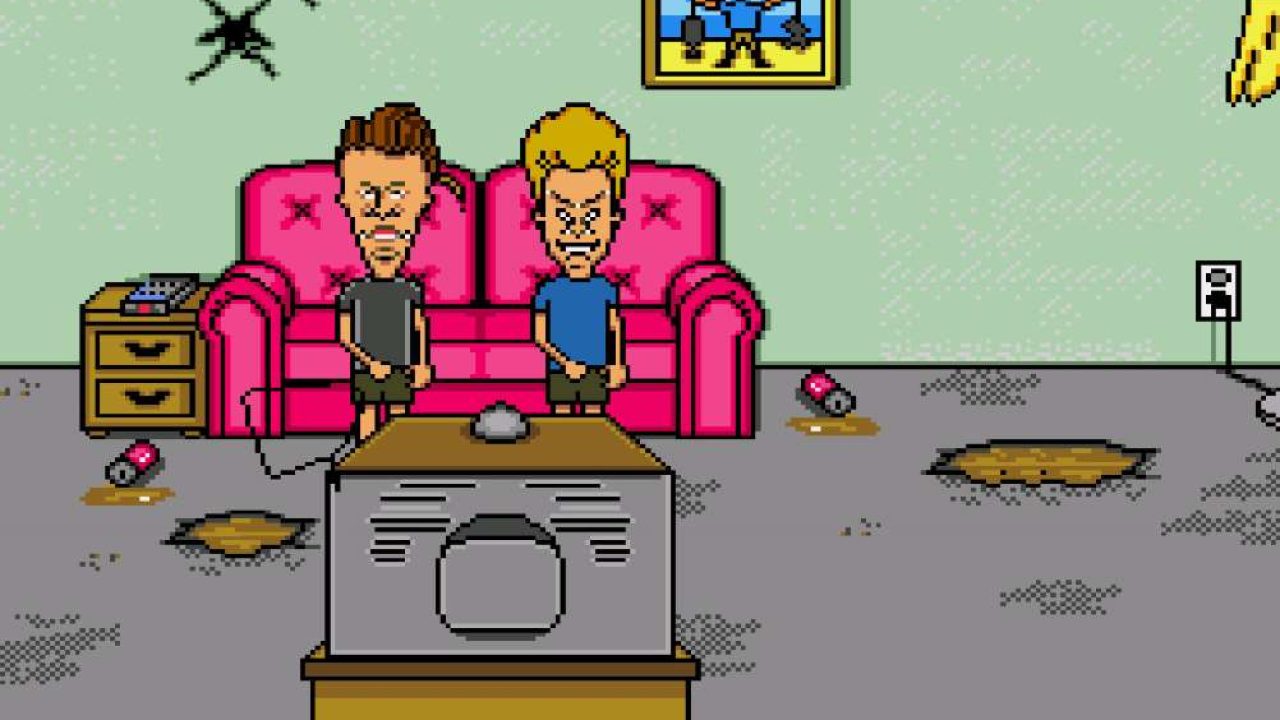 I know what you want to ask: is this game cool? Or does it suck?

And that’s the premise of Beavis and Butt-Head, some weird mix of platforming and a scavenger hunt which differed between several consoles which saw the MTV characters appear under the same title.

This version, for the Sega Genesis, could be summed up as fun and brutal.

For starters, the game was rated appropriately to take advantage of the license. However, as we know from decades of licensed stinkers, the source material is somewhat lacking to make a compelling game.

Just how do you get Beavis or Butthead into a game? What is the plot? What exactly do they do?

In the day and age before tutorials and effectively giving us the breadcrumbs needed to beat games, you had to guess what to do. The game starts with some really cool cutscenes that outline the story, complete with sound bytes from the show.

Beavis and Butt-Head see a TV commercial for a GWAR concert. They buy tickets, but they end up eaten by their neighbor’s dog, and nearly retrieved before that neighbor, Anderson, chews them with his lawnmower.

You then start in the duo’s living room, and that’s where the confusion begins.

You eventually discover that you can run (hold A), jump (press B) or commit various actions (press C) such as picking up items or burping/farting as your primary attacks.

A pause menu allows you to cycle through various items or an occasional weapon, plus toggle between the two main characters.

You can move about in almost every direction, which can also make it difficult to know where to go. Once you discover that you can pickup the TV remote, you can leave the two-room house and start venturing out into places such as the mall, high school, or Burger World.

Without any further direction, I feel this game would take forever to figure out without the aid of guides and/or cheats. A password system allows you to continue from where you previously added another ticket, but beyond that, dying in any level returns you to the couch – with no items and none of your saved ticket pieces!

It’s about as open-ended as a game in 1994 can be too, as you can choose any level to go to, but there’s certain areas or items that can only be acquired after performing actions much like the Legend of Zelda’s famed trading sequences.

Because the main items aren’t highlighted in any important way, and you don’t have much discussion with the NPCs, this is where the game can be a clusterf*ck… not to mention losing your health as the “enemies” (such as cops or “cool girls”) can send you back to your couch empty-handed, over and over again!

Kicking the health meter to the side – ahem, via cheats – I was able to follow through the sequences for the most part, but you still have to know what to get and where to go.

Oh, and your can only hold so much in your “pockets”. That plays hell with backtracking through certain levels if you don’t have what you need to trigger certain actions. (The concept is to collect items and then drop them in your room for later retrieval.)

Near the end of the game there’s a fishing minigame of sorts that is one of the worst, buggy aspects of any game ever made. If you have fast fingers you might be able to fish the last piece of the GWAR ticket out of the window.

Beware, because if you use the wrong bait after the trigger fingers? Yeah, you’ll catch an unbeatable Earl, who kills you in one hit. (Seriously, you can’t get past him, so write down the convoluted password before you fish!)

If you’re lucky enough to make it, there’s two endings to the game at the GWAR venue, each ending with the band rocking out.

Overall, this title has charm and fits the bill for B&B fans. On the other, it’s about as frustrating as Konami’s original Teenage Mutant Ninja Turtles and can be impassable in certain areas either due to the design of the game or simply not knowing what to do next.

For those reasons I put my thumb in the middle, because there’s no way a 90’s kid doesn’t play, what is a 30-minute start-to-finish game, for at least 100+ hours.

All because you don’t know what to do or the game has cheap enemies and kill shots.