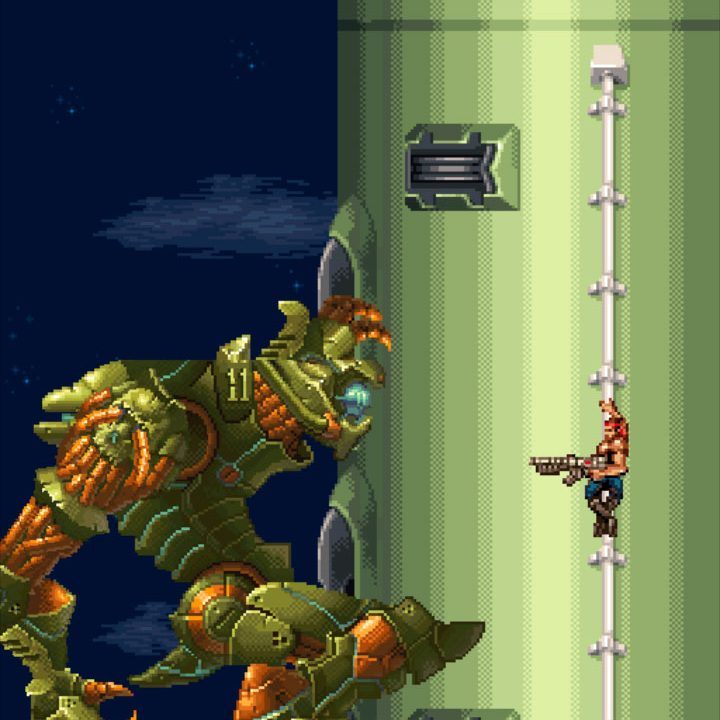 Holy %$&^! Is this game freaking amazing!

While I really liked the original NES Contra and Super C and while Contra 3 for SNES upped the ante for the series, Contra: Hard Corps showed what an accelerated, mature-themed, arcade upgraded style of Contra could really be.

I’m surprised more of the games in the series didn’t take a cue from this one. It had a rocking soundtrack, catchy visuals and finger-blistering action. Bosses take up large portions of the screen and the entire game feels like you’re in a non-stop Hollywood action film.

Some of the gameplay is a bit different than the traditional Contra titles, but that doesn’t take away from the fun. Rather than upgrading guns or even switching between two, there are four main weapons which you can switch between once you’ve acquired them. Bombs are also included and while this is a side story without the main characters, it actually adds to the Contra lore.

Honestly, this may be my favorite Contra game played to date. I feel like it was a forgotten title and doesn’t get the love it deserves. I even considered changing my rating system for two thumbs up, that’s how good this is. Try it sometime!

I have no idea what Konami was thinking when they released this game. My initial thought is that they developed a game that sucked and had to slap the word “Contra” on the box to get some sales.

Contra Force has zero ties to the first two Contra titles released on the NES.

And I do mean zero.

It feels like your typical side-scrolling action game and nothing like the other Contra titles, with exception of the overhead style levels which are closer to what was seen in Super C, but even those feel more like akin to a game like Commando with the side-scrolling ones in the vein of Double Dragon when it comes to the size of your playable character and the enemies on-screen. (With bosses being absolutely huge and annoying to defeat.)

The graphic direction is different. Entirely different. Gameplay is too, where different guns are instead replaced by upgrades given when finding briefcases. Like the others you lose those upgrades when you die, which is far too often.

Your weapons are instead dictated by choosing which character you want to take into battle. There’s a submenu to change characters or even use a computer-controlled partner, assigning a strategy of how they operate. You can get around the three lives limitation by switching within this menu, though unlimited continues help.

The worst part of this game, aside from the cheap kills familiar to NES players, are several areas with nearly impossible jumps. I spent a great deal of time in one area attempting a single jump: I couldn’t imagine doing so without the benefit of save states.

Therefore, this game gets a thumb down. I completed it. It was cheesy. It was buggy. It was gimmicky. And most importantly, it was not Contra. It was a slow-paced game borrowing a popular title. It’s playable but it’s not that much fun. The only appeal is being able to say you’ve played another “Contra” game.

Like most SNES titles, Contra 3 is a worthy upgrade and successor to the original series. Upgraded features, graphics, sound, the whole she-bang.

I usually have a lot of things to say about a game, but other than this being frustratingly difficult at times, what is there to say? It’s a bigger/badder Contra and a must-play for anyone who enjoyed the original NES title.

PS – The dreaded top-down view levels, using the shoulder triggers to spin left/right are a pain in the butt! I know that’s a spin on the ol’ forward view of the previous games, but dang… what poor execution in my opinion!

It’s not often that a Game Boy can live up to it’s bigger console brother, but Operation C is a fairly solid, albeit short, title.

If you’ve played Contra before, you know the drill. You’re given a small number of lives, in his case two (with a one-up after completing each stage) and have to plow through difficult button-mashing shoot-em-up levels against guerrilla forces and eventually, aliens.

If you’ve never played them, Contra is totally a mash-up of Rambo and Aliens. This small screen version is tried-and-true to the same formula, but as mentioned, there are only a handful of stages. That doesn’t downplay the difficulty or the cool additions which build on the usual concept.

In fact, even with the monochrome palette (colorized by the Game Boy Color in these screenshots) I thoroughly enjoyed this game. It’s a quick must-play for any fans of the series.

Want to play a sequel with upgraded graphics, sound, and difficulty?

Then check out Super C, a game which I’d guess was the cause of many broken controllers back in the day. Holy cow this sucker is HARD…

But thanks to modern technology old folks like myself can enjoy this game with a little less frustration and play them through.

The premise, shoot as many bad guys/aliens as possible, continue the Contra tradition of being a mix of one-part Rambo, one-part Aliens. The weapons, the controls, pretty much everything in this game is the same as its predecessor, which isn’t a bad thing.

Enemies fly at you in swarms from every direction. Newer enemies, like these floating bubbles, are a major PITA too. The inclusion of slopes, and some HUGE boss battles are highlights (I won’t spoil some of them).

However, I’ll caution potential players that the “overhead” level they added is pure hell to be avoided at all costs. It’s incredibly difficult and removes the ability to jump.

I really, really enjoyed this game. Check it out!

Is this game better known for being fun, difficult, or because of the Konami Code? (Which was a necessary evil when trying to beat it back in the day!)

Regardless, I tend to think Contra was pretty groundbreaking. While arcade style games were all the rage, Contra took the shooter genre and slapped it into a bowl mixed with the Rambo and Aliens movies.

Rather than make some overly complicated game (of which many will be reviewed here) Contra stuck to the basics:

The placed onus on moving forward, be it horizontally or vertically, while upgrading weapons, avoiding every enemy and enemy fire, and jumping between different platforms/areas within each level.

The boss battles are in your face. At the time this was practically unseen on the NES. Large enemies which took up a third or more of the screen, which made for tight quarters to attempt to beat the board.

Did I mention you could play with a friend simultaneously? That was probably the best part of this game.

It was just so hard to beat this game without perfecting every nuance. However, doing so was satisfying. Even the ending has a little something “extra” besides showing credits or defaulting back to the start screen.

That makes Contra a cornerstone of any video gaming library.