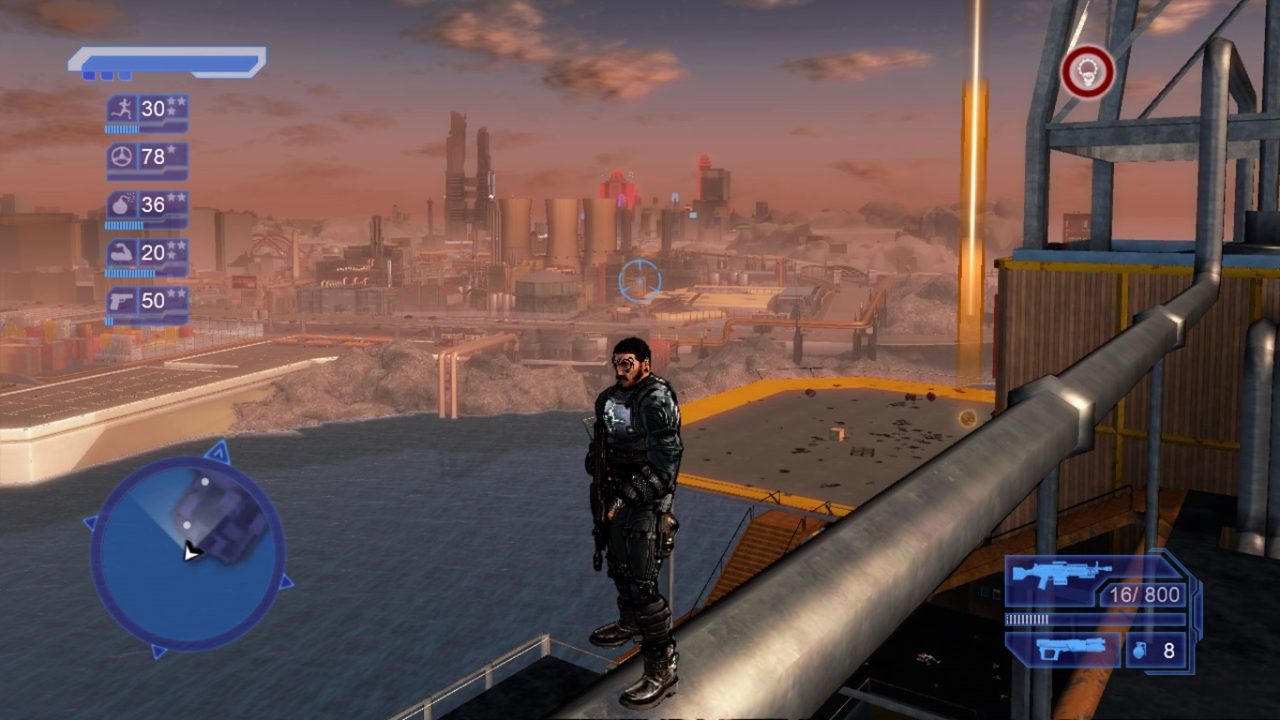 I’m not Microsoft ever intended for Crackdown to become a franchise.

Basically, the Xbox 360’s answer for a Grand Theft Auto open-world style game, Crackdown was originally pushed with an add-on disc for one of the most anticipated games ever – a beta version of Halo 3, the Master Chief’s first foray on the 360.

It was a clever marketing tactic: buy Crackdown, get a first look at the upcoming Halo 3. Yet, Crackdown stood on its own and over time became one of the best-selling games on the console.

The premise is a bit of the opposite as GTA. Instead of playing as a criminal, Crackdown puts you in the shoes of a genetically enhanced “agent”, sent by an organization called “The Agency”, in order to clean up Pacific City. Like others in the genre, your character grows over time, leveling up in one of five areas: strength, agility, explosives, firearms, and driving ability.

In order to level up in each, you must perform those abilities through your standard gameplay – with the exception of “agility orbs” and “hidden orbs” – the former increases your ability to jump, while the latter increases all of your statistics by some random distribution method. (Maybe?)

The agility orbs are the heart of the game and what makes it feel as if you’re playing as Superman at times. Buildings in different areas range from small one-story shops to apartment complexes and skyscrapers. The creative ways in which the developers bring you along vertically scaling throughout the game gives you a big sense of achievement as your character turns into a bad ass who can blow things up a la a Michael Bay movie or jump from rooftop to rooftop.

With over 500 agility orbs and 250 hidden orbs, collection-crazed gamers who must complete every minute task in a game stay challenged as well. (There are also various races, such as rooftop races on foot or stunt races with the vehicles to complete too.)

This game is also one of the first I can recall having changing real-time ads on the in-game billboards throughout the city. Playing through for my third time on the Xbox One seems to have updated the previous ads from many years ago (which I believe were for a Dodge truck and maybe Mountain Dew.)

I haven’t even discussed the wide array of weapons and vehicles at your disposal – yes, you can toss civilians out of their cars just like GTA and take the “acquired” vehicle for a spin.

Your agent then uses all of the above to remove three areas of Pacific City from three rival gangs – you can go straight to the end from the very start, but you’ll get smoked almost instantly… which is the appeal of leveling up and progressing through the game at a certain pace.

Ignore that advice and you’ll just keep dying trying to defeat some of the bosses: with each gang having a main “godfather” of sorts and a number of underlings that must individually be disposed of to help cripple their various operations.

Graphically the game used a cell-shaded cartoon style which still looked semi-realistic on screen. For the 360, it was one of the more visually impressive games upon its release. The audio is pleasant, the explosions are blockbuster-esque and the controls are mostly on point, which the exception of some tedious jumps that may not go as planned (especially when scaling the larger buildings later on).

There were some gripes about framerate stutter when there’s too many enemies on screen firing at once, but to be honest, its such a minimum and almost expected when so much has been packed into the game.

Crackdown may have been thought of as the ticket to previewing Halo 3 at first, but it has a cult following and a legacy as one of the best 360 games created – and perhaps the best of the three titles in the series.

With its arcade-driven gameplay straying from some of the more story-driven elements of GTA games, those gamers who don’t like GTA will perhaps enjoy Crackdown even more.

In fact, it will remain one of my favorite games ever played.