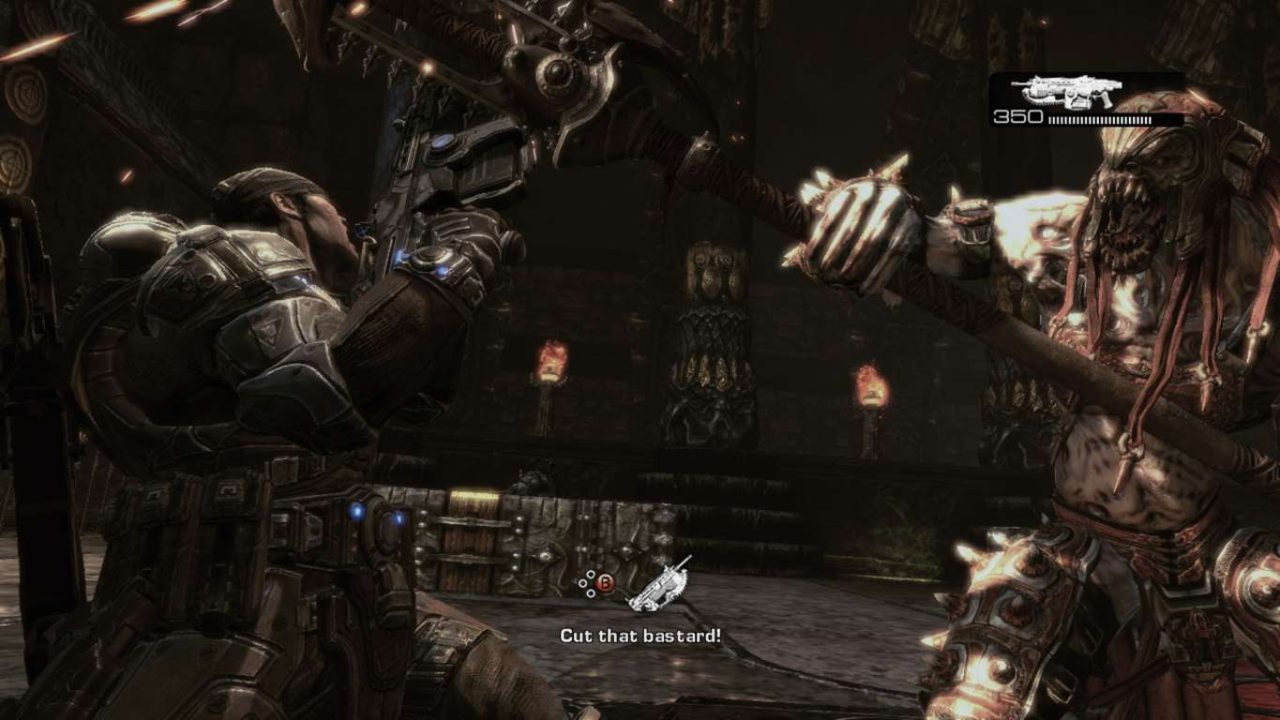 One of the driving reasons I started this website was to archive the games I played; in doing so, it keeps me driven toward playing titles which I sometimes missed (due to lack of time) or simply fell out of touch with.

None could be truer of the Gears of War series, which is a set of games I certainly purchased over the years but had been collecting dust in the drawer. I’m not sure why either, because this entry into the series freaking rocks!

You’ll likely notice that my screen captures are not from the Xbox 360 edition of Gears, but instead the Xbox One update Gears of War: Ultimate Edition. Part of my decision to include this as a “retro” game (despite being released in 2015) is the backwards compatibility – I was pretty much forced to play this one, but as with some games I missed out on, I don’t mind playing the “remastered” edition over the original, as is the case with Ultimate Edition.

What Ultimate Edition adds or changes isn’t too significant. Obviously, the visuals and audio were remastered to run faster and look better. Those are good things.

The biggest change? Adding in five chapters that were only available in the PC version of Gears 1, and were subsequently nixed from the 360 version. As such, those missing chapters from the first game on the 360 complete the title and were a necessary reason for playing the remaster. (Note: Since this game is based on the original release, I also made the executive decision to include facts for the original and not the remaster as part of this review.)

The final of those cut chapters is a heart pounding battle with the Brumak: If you’re a Gears fan and missed out on this, you must go back and play this chapter, because it’s one of the most satisfying levels I’ve ever played in a game.

The rest of the game plods along with the apocalyptic alien takeover plot you may already know. Some critics say this game hasn’t aged well, but it spawned many sequels and is definitely a classic. For someone who traditionally sucks at video games like myself, I took to the military brute force style just as well as the duck and cover strategy.

The game can be unforgiving in spots if you aren’t sure exactly what to do, but so long as you listen and pay attention, there are more than enough clues throughout so you’re not stuck.

The gruesome way enemies are blown to bits, chopped up with a chainsaw add-on to your souped-up machine gun, or how the characters vulgarly interact with one another, could’ve been cheesy.

However, in the Gears world it simply works, and adds an aesthetic that’s fun, but also shows that some games can be made for adults only.

In all, this game got me excited to go through and Hammer of Dawn my way through the sequels. It was a great visit down memory lane and a remastered title worth revisiting.