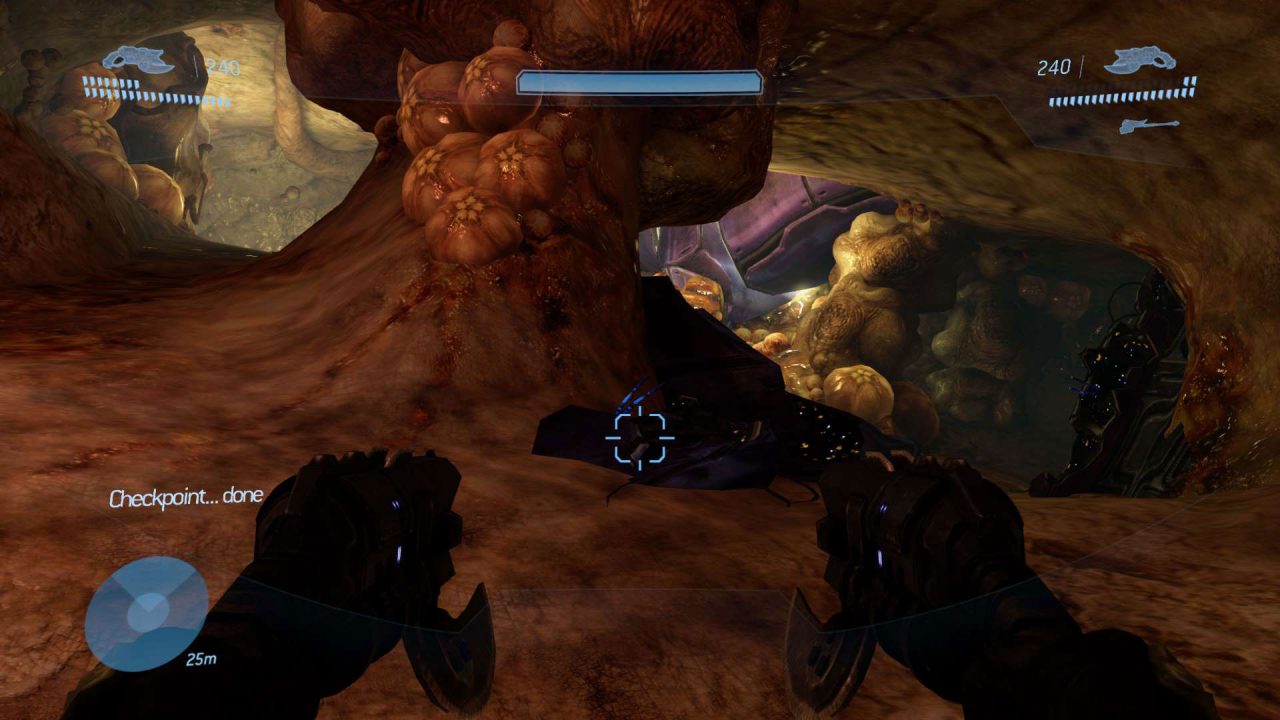 I complain about a lot of games on my blog, and there are others I rave about. Whereas Halo and Halo 2 felt like progressions in the series, my opinion of Halo 3 is that the story was a bit harder to follow. Despite the natural upgrades moving to the newer generation Xbox 360, some of the gameplay feels monotonous and otherwise not much of an evolution over Halo 2.

I think I feel this way because in the jump from Halo to Halo 2, we learn there’s multiple halo installations while being able to play as the Arbiter, wield dual weapons, and of course, the energy sword. The plot still revolves around the Covenant and the Flood, and for me, Halo 3 still does a lot of the same things good but I’m not sure the leap was great.

Part of that blame likely goes to Halo 2 for being such a leap from the original in so many ways. The other part of that blame is the Xbox Live mode that originally threw me off of this game years ago. Included as a beta with Crackdown, we all got a taste of how great Halo 3 could be online.

When we finally got Halo 3 in our hands, however, the little preteen voices in my headset still haunt me to this day.

Sure, I can get “gud”, but no, you really can’t when you’re up against players who stayed up for release and played without sleep for 72 hours, while you’re just removing the shrink wrap from your copy days later! In fact, this game pretty much killed my wanting of ever going online to play video games.

There’s a certain appeal to sitting in a room with friends playing split-screen Goldeneye 007 that cannot be replicated over the internet with total strangers.

Sorry not sorry… now back to the singe player campaign.

Technically, there’s nothing wrong with Halo 3. I’m even giving it a thumbs up, because compared to everything else, it’s a really solid title still. The plot, as mentioned, seems to jump around a lot. Sometimes you want to just get right to the action only to have interruptions.

For that reason, I wasn’t the biggest fan of Gravemind and the final levels where he’s rebuilding himself on a halo installation. It was different, but at the same time felt out of place.

And of course, Halo can’t possibly end without a driving gimmick as the final final part of the game. (At least this time there wasn’t as many mindless timed jumps or maneuvers necessary, and even if you do miss a section, the checkpoints are more plentiful.)

There appeared to be a lot more focus on vehicles too, but the combat was more evenly balanced. Bigger vehicles can take out smaller ones with better balance, and collisions seem to be on point too. Yet, it still seems like an extension of Halo 2 to me in many ways. Even the epic scarab battles feel a little recycled, though the first appearance of one in Halo 3 will still make you pop when it comes onscreen.

While it seems as if I’m dumping on this game, I still enjoyed it. I believe it lives on so highly rated due to other features, mainly multiplayer, which is what I soured on while others liked it.

The campaign and plot portions, however, were a mixed bag according to some reviews sourced on Wikipedia.

Reception of the single-player aspect varied. Yin-Poole wrote that while the cliffhanger ending of Halo 2 was disappointing, the campaign of Halo 3 was much more satisfying. Gerstmann, GameSpy’s Gabe Graziani, and Goldstein maintained that the campaign was too short, especially on easier difficulty levels or with three additional players in co-op. Goldstein was highly critical of the eighth level, stating “the penultimate chapter is so bad, just thinking about it puts a rotten taste in my mouth.” The New York Times’ Charles Herold said the game had a “throwaway” plot and Total Video Games judged the single-player aspect ultimately disappointing. Goldstein and Steve West of Cinema Blend thought a part of the game’s story was lost by not having the Arbiter featuring as prominently as the character was in Halo 2.

This made me feel better about my initial thought of revisiting Halo 3. I really can’t say it’s bad, but it still doesn’t feel groundbreaking – now or then.

While I leave it in the present day with a better appreciation for the total package, I feel it could be the weakest single-player campaign in the entire series.

Like most of my Xbox reviews, I want to point out that I played this version of Halo 2 on the Xbox One.

Unlike a lot of my reviews, this game was remastered for the new console, but with a caveat: you could switch between the HD remastered graphics and the original, while playing on the fly!

Now back to our regularly scheduled program.

When Microsoft launched their first-ever console, the original Xbox, a lot of folks had no idea what to think of it. Would it be yet another failed concept in a crowded field? That field included Nintendo, Sony, and at the time, a struggling and then failed Sega console division.

As such, onlookers such as myself heard of Halo and only knew of rumblings that it was a “killer app”.

As the Xbox gained momentum, I also gained an Xbox, just in time for the release of Halo 2.

Let it be known, Halo 2 was the true killer app for the OG Xbox.

By this time the bulky “Duke” controller was replaced with a more streamlined version, broadband internet began to penetrate more homes, and Xbox Live was taking off like a rocket. The sequel to the original Halo dropped in 2004 to take advantage all of all this and more.

While Halo 2 brought online multiplayer, I still feel Halo 3 (on Xbox 360) was the pinnacle of that component being a bigger feature than offline campaigns in games. Halo 2’s campaign was solid, but I can’t be the only one who felt the plot was a bit disjointed.

You alternate playing as the Master Chief and “enemy” Covenant equivalent “The Arbiter” as we learn of opposition’s obsession with the Halo ring world installations. I won’t spoil anything else here, but just know that sometimes the storyline gets confusing if you’re not totally all-in on the Halo universe.

Halo 2 is considered one of the greatest games of all time because it greatly expands on what made the first game so popular. The game’s cover art teases a feature missing in the first game, the ability to wield two guns at the same time.

While some weapons are exempt from dual-wielding, the change was notable as first-person shooters such as Goldeneye and Perfect Dark had done so years earlier. The omission felt odd in Halo, but Halo 2 makes it “make sense”.

New weapons are a given, but none more so than the introduction of the energy sword, which often allowed for one-hit kills that were also popular in other FPS titles.

Of course, the weapons all have their give-and-take moments, and dual-wielding means you can’t melee attack, toss grenades, or switch to your holstered item without dropping the second gun. (In other words, there’s strategy involved!) The inclusion of vehicles is here as well, including more opportunities to see how the Covenant tech works too.

There are some sheer brilliant moments in Halo 2, aided by full-motion video cutscenes, gorgeous settings, and an epic cinema quality soundtrack.

To this day, playing Halo 2 on its original settings is still jaw-dropping. The HD remake sends it into another stratosphere where the no longer dated effects disguise it as a current-gen blockbuster.

FPS fans who have never had the privilege of playing the original Halo games are definitely missing out – and the series’ first sequel is as over the top as any other franchise’s, including Super Mario Bros.

I highly recommend this game – and as a bonus, those with Xbox Game Pass can play it at no extra charge.