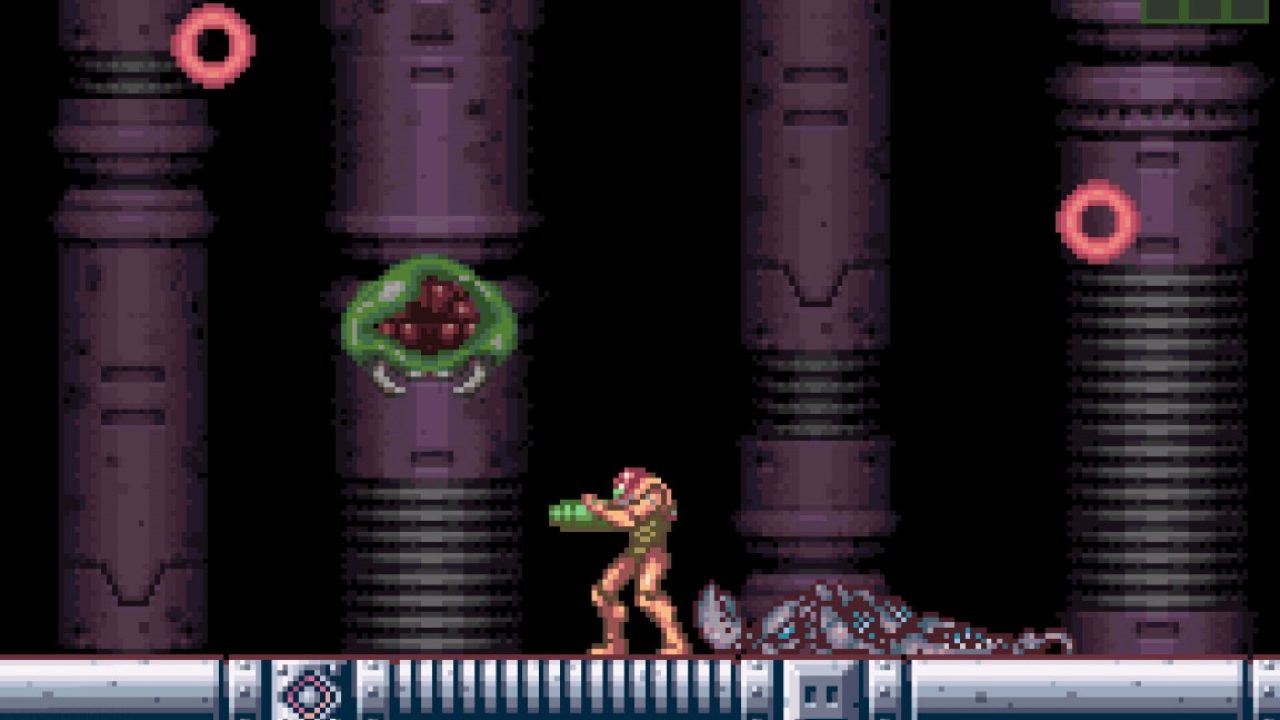 Hot on the heels of the latest Metroid series release, Metroid Dread for the Nintendo Switch, I just had to revisit this Game Boy Advance classic, which I overlooked as simply the original Metroid with updated graphics.

I couldn’t have been more wrong.

Just as Nintendo had done with rebooting Metroid II: Return of Samus as Metroid: Samus Returns on the 3DS, they took the first Metroid game and gave it a shot of steroids on the GBA years earlier.

Retelling the same story with a map closely resembling the original game, the rest falls into brand-new territory with not only updated graphics and sound, but much of the map is laid out with new terrain, areas, and controls to help you navigate both.

In addition, many weapons and features from latter Metroid games make an appearance, which turns the old school experience into a unique one of its own. I was so blown away by this game, it has instantly jumped into my top list of GBA titles ever made.

My only knock on Zero Mission is that it’s a short four-hour run-through. I could’ve backtracked for a few more items to 100% the game, and add a bit more time with it, but as you can see, it wasn’t necessary to complete the game.

I will say that Zero Mission is much more forgiving than the original Metroid, and its also a lot more accessible. There’s a hard mode if you wish to crank the difficulty back to the first game, but the main items helping are more energy tanks, save rooms (which didn’t exist with the password system on the NES), and maps/map rooms so you can find your way around.

Extra touches with the new power-ups don’t feel out of place either, including the speed booster first introduced in Super Metroid.

Speaking of completing the game, the bosses are all revamped as well – from Mother Brain to Kraid and Ridley, expect a different experience than what you saw on the NES. It’s familiar, but also welcome.

The images below have some spoilers I won’t note here, and if you haven’t had the pleasure of playing this title yet, do so: it’s not only one of the better Metroid games (as if there’s a bad one) but one of the best in the genre it created too. Not only is it a great remake, but it successfully refines and adds upon its source material.

The sequel to the cult classic NES title of the same name was smooshed into the tiny handheld screen and released for everyone to see in various shades of green back in 1991. Thankfully, Game Boy Color colorization saves my eyeballs whilst playing one of my favorite childhood games.

But does Metroid 2 still stand up to this day?

As we all know by now, Nintendo “reimagined” this game a few years ago with a totally overhauled “Samus Returns” remake on the 3DS. That game came about after numerous fan projects applied Super Metroid graphics to the Game Boy classic – but it should be noted the 3DS remake is NOTHING like the original. (There are so many reasons I can’t even list them here. So take my word for it!)

Metroid 2 builds upon the exploration and upgrade aspects of its predecessor. This time, Samus is alerted to a Metroid presence on a remote planet.

Unlike the space station style exploration of the original, Metroid 2 has a few subtle differences. First, there’s no true bosses in the game until the final confrontation with the Queen Metroid. Instead, you must clear the planet of evolving Metroids, a variety of which include the puny Alpha type up to the far deadlier Omega Metroids.

Areas of the game are once again obstructed. You cannot continue unless you eliminate a certain number of Metroids (which causes flooded areas to drain as the queen rampages at losing her babies) or until you find certain power-ups, of which several new ones are introduced for the first time.

Some of the debuting items include the plasma beam, space jump, spider ball, and screw attack.

Quite honestly, I’m not sure how I played any Metroid game without several of those items!

Metroid 2, however, lacks an internal map or inventory system. This becomes relevant as backtracking and trick walls come into play throughout the game, extending the campaign somewhat unnecessarily. (If you decide to play this, look up a guide!)

Samus can only carry a single beam at a time still, which by the game’s conclusion is another necessary evil: finding the ice beam again to defeat the Metroids. (Luckily a second drop of this crucial weapon isn’t too far away from the final portions of the game.)

Samus’ space ship is also front and center in this game, and has been a hallmark ever since.

The biggest changes or omissions, besides the bosses, are a lack of air-lock doors and elevators, which are seen in almost every other game in the Metroid series. However, unless this is pointed out to you, you wouldn’t even notice it as the game plays much like the first.

With the noted updates, Metroid 2 stands out as a sequel that’s often thought of as better than the original, even with the lack of audiovisual limitations on a handheld console. (It also stayed much closer to the source material than other Nintendo franchises, such as Mario 2 and Zelda 2!)

If you’re a Metroidvania connoisseur, you owe yourself a treat by playing this game. Even 30 years later it holds up as a timeless classic – but be sure to turn on the colorization if its available to you!

Now here’s a classic for you 8-bit Nintendo gamers!

I’ll never forget holding this game in my hands for the first time. The shrink-wrapped silver box with a spaceman-of-sorts ready to fire an arm cannon at aliens.

Metroid captured the imagination of the era, which included Sigourney Weaver’s Alien movies. Little did us gamers know that Metroid captured a bit too well, that is, until you saw one of the secret endings or used the infamous “JUSTIN BAILEY” code on the password screen.

Either would reveal that the game’s protagonist, Samus Aran, is a female – a pretty shocking (and cool) revelation at a time when such information was rarely spoiled for gamers.

Metroid (and Konami’s Castlevania) would be so iconic and groundbreaking that the term “Metroidvania” would be coined for a genre of games with a similar premise: unlocking new areas by gaining new items/powers, often which requiring a lot of backtracking throughout the game.

But that wasn’t all that made Metroid unique. Most games of the time scrolled sideways, but Metroid did that and had vertical sprawl to it. You would often have to fall down, or scale, large corridors to get to the next section of the game.

With the exception of requiring certain items to get to certain locations, the game was also open-ended; meaning you could choose to go just about anywhere you wanted. (Though doing so might get you instantly killed if Samus wasn’t adequately equipped!)

The premise of the game is that Space Pirates stole an parasitic organism known as a “Metroid” and planned to replicate them as biological weapons.

Samus is actually a bounty hunter, tasked with hunting down the pirates and their leader, the Mother Brain.

The sci-fi overtones, fleshed out storyline, unique graphical areas, and new open-ended adventure made Metroid stand apart, but that’s not all it was known for. Samus was the first character to “spin jump”, curling into a ball mid-jump, in a video game: something taken for granted now but totally new to gamers in 1987.

There are so many good things I can say about this game, but in summation: combined it made for a helluva action/adventure game that still has a cult following to this day. Not only did it launch an entire series, but it launched an entire gaming genre.

If you haven’t played it, or any of its sequels, you’re doing yourself a disservice.

Even with 8-bit graphics, the original Metroid still stands tall as a game that is as accessible and replayable as any to this day.

One of my favorite games of all time has been consistently regarded as one of the greatest video games ever made.

I became a Metroid fan early on as my mother picked up a copy of the game, likely recommended to her by someone at whatever store she was shopping at, at that time. Being a kid, I had no idea what Metroid was. It came in a silver box with blocky sci-fi artwork. It’s a new game, probably a birthday or Christmas gift, so you’re definitely going to pop it into the NES and give it a try.

That was literally the open-ended world of Grand Theft Auto before such a thing existed. A monochrome sequel followed on the Game Boy before the Super Nintendo version, Super Metroid, released.

“Super” was used to describe just about every game that came out for that console, but it was more than appropriate for this title, which just kicked down the doors of in-game exploration precedents which were set by the original game.

Graphically the game was state of the art for its time and still holds up well today. The audio is immersive and overall there just isn’t one bad thing that can be said about this game, other than you could waste an awful lot of time trying to figure out what it is you’re supposed to do next! There are a few hidden goodies, and maybe even the hardest area to figure out (where you use the hyper run into a jump) has a clue built within the game. (Kudos for that developers!)

Overall my verdict on this one is MUST PLAY!