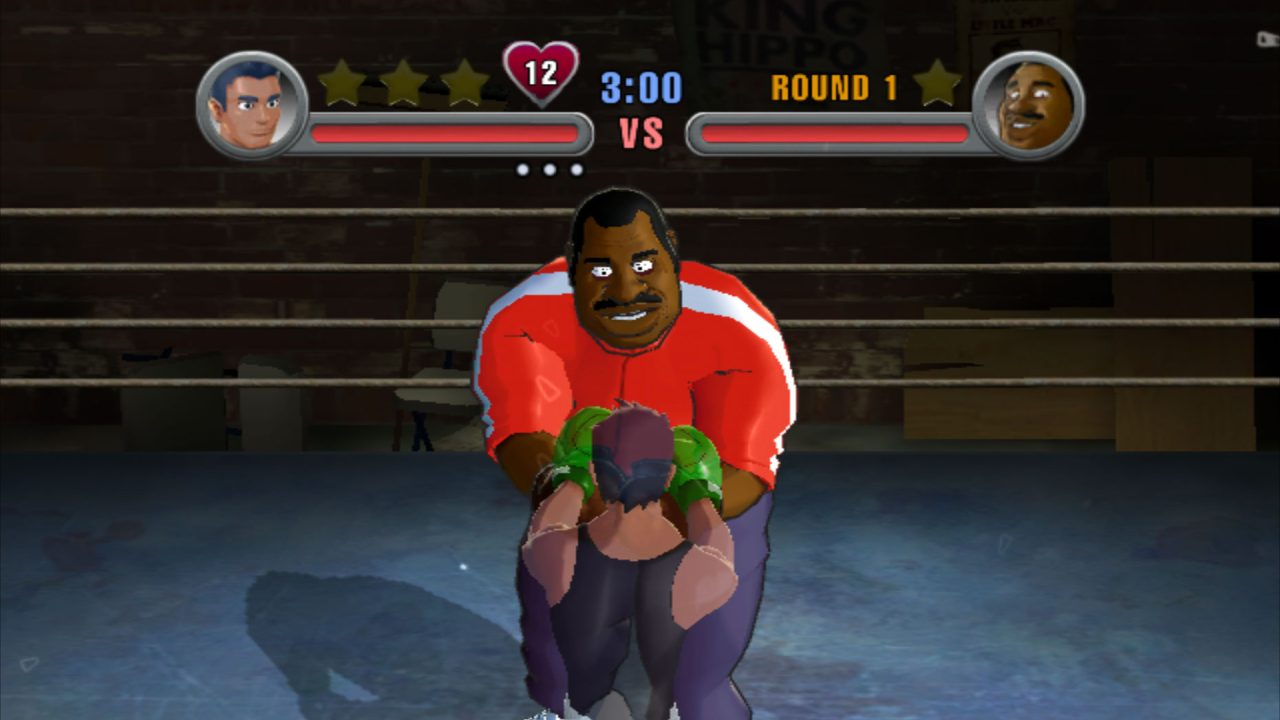 For as much as I crapped on Super Punch-Out!! I’ll tell you I loved this game sooooooo much more.

Every single part of this game has a nostalgic and fun feel to it. I had strongly criticized for the SNES version for being too easy and lacking any depth. Well… the Wii reboot takes everything from the previous games and ratchets up the level ten-fold.

The graphics look like playing a cartoon and are highly detailed. Fighters even sustain “damage” and each has neatly animated openings and endings.

The gameplay feels as if you’re incorporating some strategy, even with the trademark punches the opponent tosses which you must dodge for an opening.

And did I mention they brought back Little Mac and Doc Louis?! (Who were ominously left out of SNES game?!)

You’re also supposed to be able to use the Wiimote and nunchuck (and even the balance board) to play with motion controls, but I didn’t try it (yet).

Overall this game is an A+ in my book and definitely worth playing. It made me feel like a kid again, and I left out some of the surprises as to not spoil for those who may give this a spin.

I feel really bad saying this, but I thought this game was much better the way I remembered it. The obligatory upgraded everything with “Super” attached, Super Punch-Out!! took the game to the next level graphically, but the gameplay leaves something to be desired.

The NES original was a classic button masher which had a sense of urgency and intensity. You knew you could be wiped out if you didn’t have a certain rhythm, or if you didn’t time the opponent’s specialty punches.

In Super Punch-Out!! the specialty punches feel like a gimmick. They take the borderline feeling of being able to win (much like one or two of the Mario Kart games) and gets gimmicky to a point where the game is all about those punches: win or lose.

In this way, it feels cheap and underwhelming. Don’t get me wrong, I still like this game and feel it’s worth playing, but some of your standard punches are going to make it through, whereas the older game was all about ducking, dodging, and timing.

And for some reason, Doc Louis (Little Mac’s trainer in the NES original) is MIA too. (Actually, the fighter in the SNES version isn’t Little Mac either… he’s called whatever you name him.)

The saving grace is the flashy graphics, added animations, and audio.

There’s a little less of that here, and it looks more or less like the arcade title, but the game is still worth checking out if you’re doing the retro deal too.

Mike Tyson’s Punch-Out! is without a doubt one of the greatest games of all time. Few games come instantly to mind when you mention “button mashing” but this one does. It also offers quite a bit of strategy, comedy relief, and anxiety.

This is a timeless classic, and the first game I can remember with a celebrity/athlete tie-in as a kid. There were others, including games based on movies, but most of those were terrible.

I had forgotten how hard this game could be until giving it another run-through. Mike Tyson is especially impossible, and even with a massive amount of cheats and save states (after giving it a legit “go” that lasted maybe a few seconds) I think it took nearly twenty minutes to topple “Iron Mike”.

That’s a heck of a boss and some major bragging rights back when games were still evolving. Other sports games were rather lame, but Punch-Out! fit the boxing genre to a “T”. It’s highly recommended if you’re into retro gaming.

One of the more odd games of its time, this version of Punch-Out! is exactly the same as Mike Tyson’s Punch-Out! minus one thing…

Punch-Out! Featuring Mr. Dream came out after the Mike Tyson version but wasn’t a sequel. Instead, it was a way for Nintendo to continue publishing the same game but without the title character. From what I’ve researched on the game, Nintendo had a three-year contract with the boxer, and following the expiration of the deal, the gaming company decided to replace the prizefighter with a fictitious one of their own.

Some people believed this was due to Tyson’s rape allegations, but that occurred later. By the end of the contract he had lost his title to Buster Douglas, but they were working on a sequel of Punch-Out, which ended up being a different game altogether when Tyson was later sent to prison. (I’ll post that game in the comments – it sucks!)

Therefore, the only difference between the two games is the “Dream Fight” which occurs after your fighter “Little Mac” wins the championship bout. The replacement boxer is called “Mr. Dream”, a boxer whose record and resemblance are close to that of the real-life Rocky Marciano.

Game-wise, Dream is fundamentally different than Tyson was to play against. You can land punches on Dream (unlike Tyson) but he’ll quickly regain his strength by beating the crap out of you. This made him harder to bring down and nearly impossible to beat within the time limit. Even with cheats, I found Dream to be a harder foe than Tyson! (And we all know how hard it was to beat “Iron Mike”.)

Alas, fighting Mr. Dream is the only reason to play this version of the game. The lead-up to this fight is identical in every way to the Tyson version and no different of an experience. (See the screenshots from both games for comparison.)