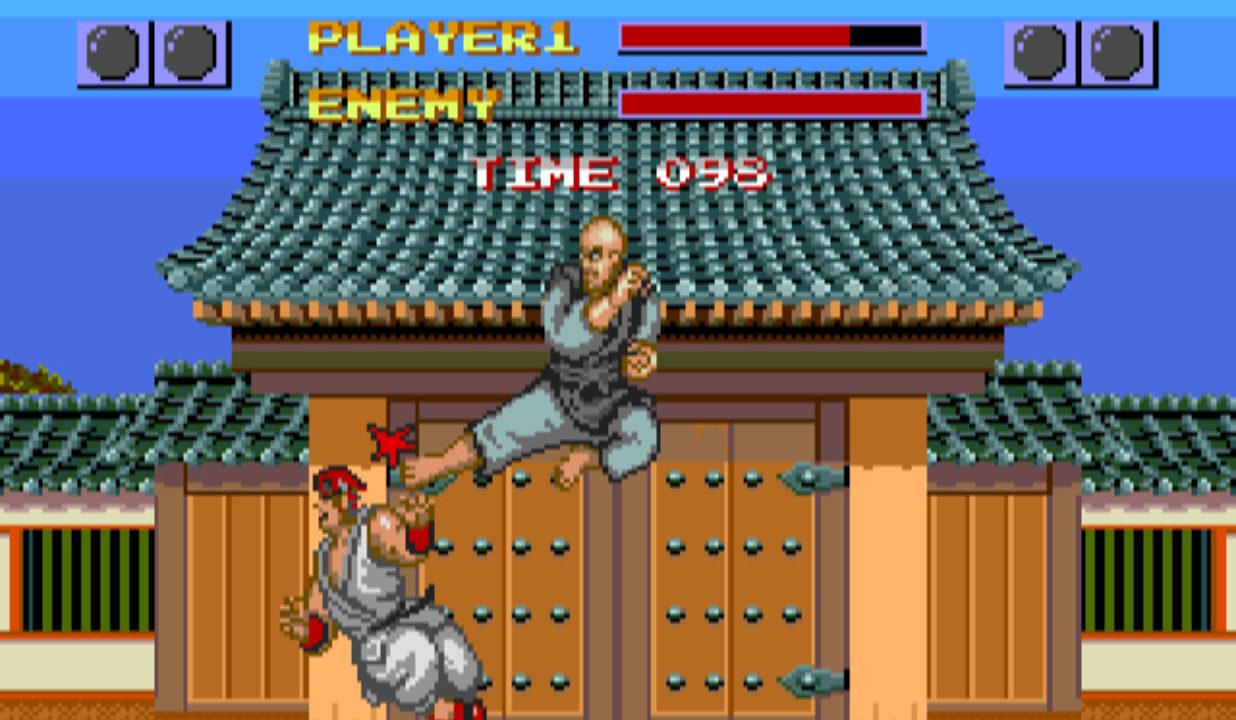 Have you ever given any thought as to why you never hear much about the original Street Fighter?

I hadn’t, until the game was recently included as part of anniversary editions issued by Capcom, featuring the umpteen editions of Street Fighter II.

That got me to thinking: where the heck is Street Fighter “1”? It’s nearly buried in history, but the very company which created it… and now I understand why.

The original, as with the many sequels, originated as an arcade game and was only ported to one console in the United States: the nearly unknown CD add-on for the almost as unknown TurboGrafx 16. Thus, American gamers never really experienced the original game of the Street Fighter franchise, that is, until it was re-released for the Wii Virtual Console as a TurboGrafx port in 2009.

That’s the version I got my hands on, but for all intents and purposes I’m listing it under it’s original 1988 label, as it’s a clone of that game.

As for the title itself, it’s dated. Very dated.

Nostalgia takes over with some of the introduced characters, as well as what I’m sure were groundbreaking concepts with the 8-way joystick and six buttons for various degrees of punch/kick combos… and of course, the special moves.

The game is a true throwback when it comes to difficulty, however. I never proclaim to be the best gamer and despite my best attempts to cheat and/or use save states, I couldn’t complete the main story mode, if you will. This game may cheat more than almost any other I’ve ever encountered, including some versions of Mario Kart or Mortal Kombat. It’s clear the arcade port was intended to make you part with your quarters and takes cheap shots that drain your life bar quickly.

And that’s considering if you beat the insanely fast timer, another relic of a bygone era where most games didn’t have you just beating an opponent, but also made sure you weren’t standing at the cabinet for too long so they could get X amount of quarters paid per hour.

Honestly, that’s my main gripe with the game. I can overlook the dated graphics and whatnot (heck, I’m playing Game Boy games still) but the intense AI cheating is too much to overcome for my full enjoyment of the game, keeping me from giving it a full thumbs up rating.

Oh yeah… this is the video game version of the flaming pile of monkey poo known as “Street Fighter the Movie”!

Now, let me be fair about this game: it may have worked if the source material (the movie) wasn’t so horrible. Capcom, in an attempt to mimic the digitized actor style of Mortal Kombat, mixed actors and game footage from the movie release of Street Fighter… into a game… based on the movie.

That’s where the downfall of this title rests. The movie is, in a word, bad. Jean Claude Van Damme is a legitimate bad ass martial artist but gets cast in the wrong role. Instead of being cast as Ryu or Ken, the French man is instead cast as American military brawler Guile.

It all goes south from there, with poor casting and more.

The failure of the film is what brings the game down to a thumb “in the middle” for me. I actually like this game. The result may be as corny as the film itself, but it’s a unique “what if” scenario for the Street Fighter series, and one of few games to lift source material from a feature film into a game.

There’s also a great amount of “fun facts” between this game and its arcade counterpart: namely that this game isn’t a port and was developed by Capcom to be a lot closer to that of Street Fighter II Turbo. That move, along with a few interesting additions/alterations to the roster and game play (which you can read more about here) salvage this title from the usual movie-based game trying to make a buck into something worth playing.

Honestly, this isn’t that bad of a game. Sure, it has its faults (the cut scenes are just, well look haha) but I’d definitely say it’s worth checking out if you’re a Street Fighter fan.

No joke, this is the game that is technically Street Fighter 1’s “sequel”. Capcom had created the first arcade Street Fighter and then re-badged this game for the North American market as some pseudo-sequel to that game by renaming characters and implying that Ken in this game is the same as the one from the arcade fighter. (Note: This game actually came out before Street Fighter II fever swept the world.)

I can’t honestly fathom a world where this game was actually popular. I do recall one of my best friends had it, but it felt like a knockoff of other games at the time such as Contra. (And equally as frustrating to play!)

The levels consist of “targets” which Ken must take out. They’re small boards, and in many cases, just a single screen. The targets repeat often and there’s not a lot of variety. Littered between levels are cutscenes similar to the Ninja Gaiden series. They’re just as cheesy, suggesting futuristic technology in the year it takes place (2010) and also includes a heavy dose of outer space and aliens.

Each stage you must kill the target to gain enough power to open a portal, which then only stays open for seconds. Miss the opening and start over. (Like other games you only start with a small number of lives too.) The main character, Ken, can also gain power-ups to strengthen his “Hadoken” which looks more like a laser/wave weapon than how we’ve come to know it.