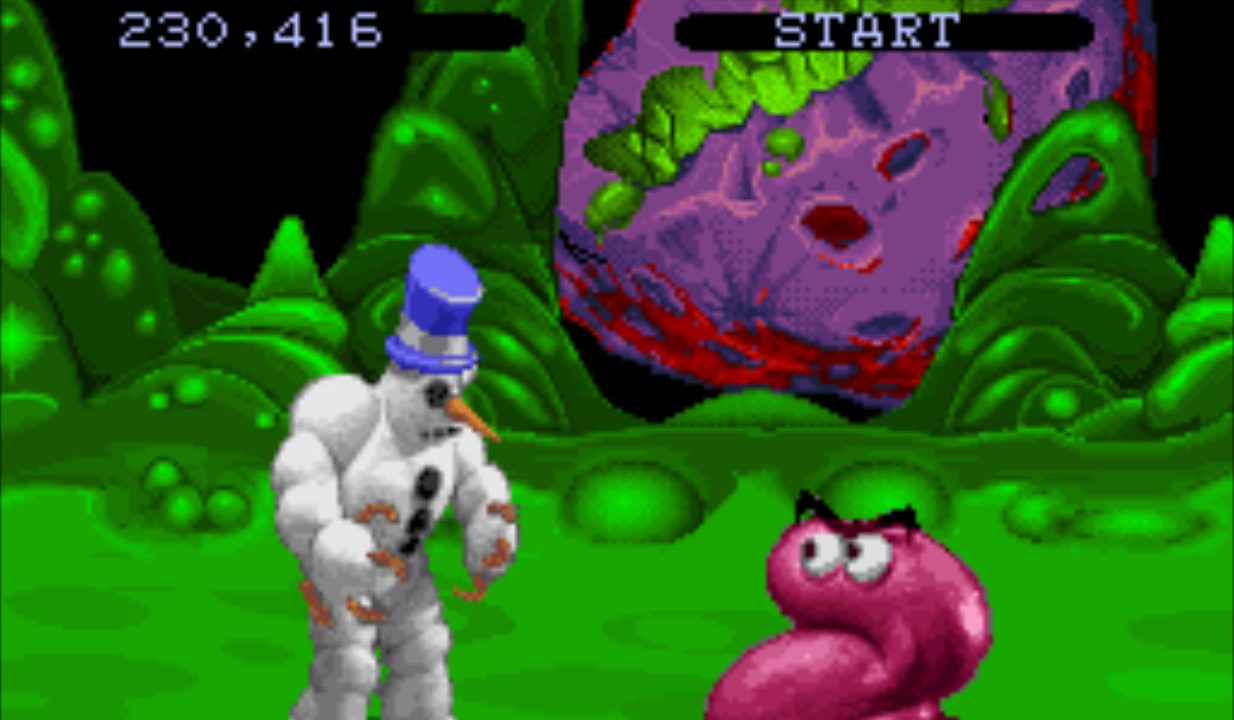 Following a flurry of reviewing fighting games for an entire month I had unearthed one forgotten game of my childhood amongst a sea of potential games to review. With Halloween around the corner, I felt it fitting to still keep ClayFighter on the schedule, because it better represents the current season than an actual fighting game.

Unsurprisingly Street Fighter II and Mortal Kombat sparked a fighting game craze in the 90’s, with many competitors looking to clone the success of those two games for themselves. Every software developer, including Sega and Nintendo themselves, got in on the act.

Then there was Visual Concepts, who have a reputation of making some great games, but instead when the parody and comedy route with ClayFighter. The main reason this game doesn’t get a fat thumbs down from me is basically due to VC’s input with audiovisual content for the title. The fighters are all 3-D generated from actual clay models (hence the name of the game) and look superb for a 16-bit Super Nintendo title.

The sound, including an announcer, are crisp and ahead of their time too.

But it’s the gameplay that is lacking… that’s putting it kindly.

Once the humor wears off, which is quickly after scrolling through the unique characters on the main menu, you are deluged with combat that takes after the Street Fighter button scheme, but not the pace or cohesiveness of being a fighting game. Computer opponents tend to block and jump all too often, with special moves often being to difficult to pull off or slow in animation to make an impact.

The traditional two-round win format is there, with a cutesy bomb as your timer, with the wick burning down to “zero”. I’m not sure if the rounds are actually 90-ish seconds like the rest, but it sure does feel like an eternity to play through just one sitting.

The levels are inspired and tied to each character as well – another annoyance as you play through the “world map” and discover you have to face some of them a second time; which is mundane as it gets.

The final boss is a “ring” and outside of that, you really get no sense of purpose for the fighters, what they’re doing there, what they’re fighting for, or even one still end-screen that tells you squat about the character you just completed the game with. It simply shows the long scrolling credits of everyone who created this mess and a neat “thanks for playing” when that’s through.

Also, the menus and even portions of the game screens (like the health bars) come off as generic – almost 8-bit generic. Whether intentional or not, it cheapens the game. Combined with frustrating controls, cheap computer opponents, and no real plot, it’s difficult for me to recommend this game at all.

Worse, if you grew up playing the Blockbuster Video Game Championships, as I did, you were likely duped into renting the store exclusive “Tournament Edition” to practice with. Hopefully a rental is all the more money you escaped spending on this game way back when, because it would’ve been a good waste of $60-70 for a cartridge that will quickly collect dust.