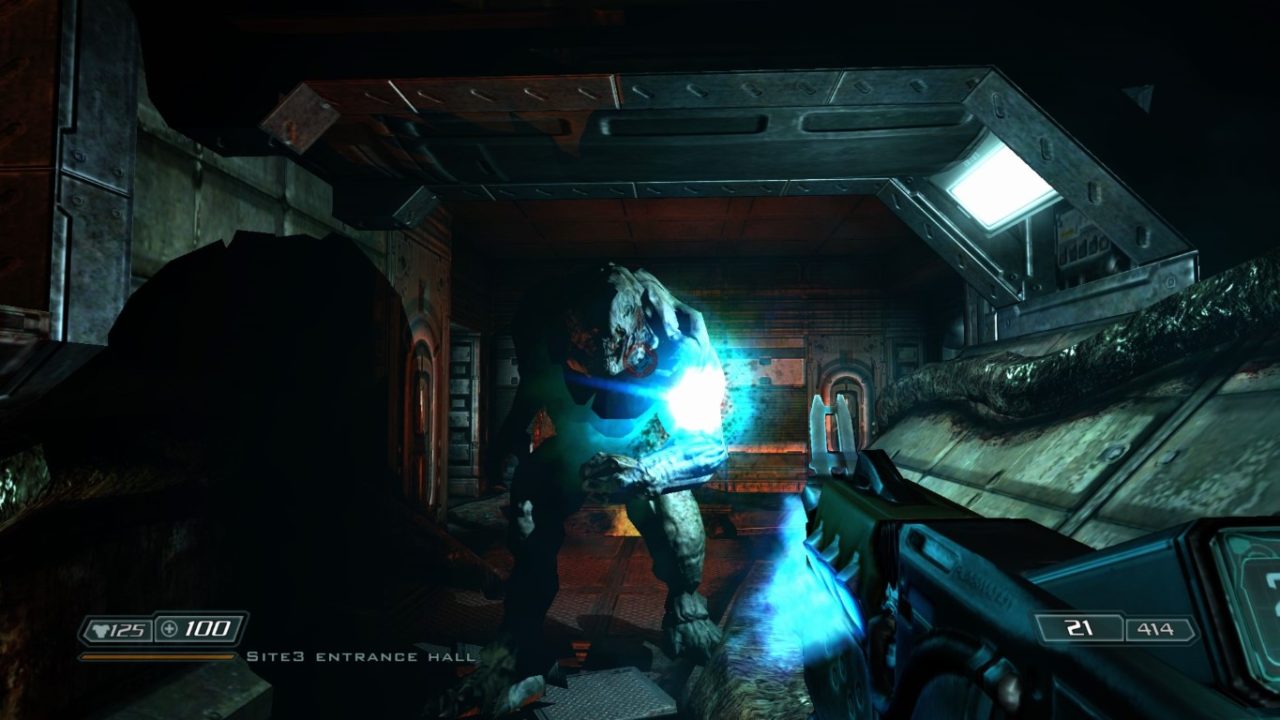 This one was a long time coming!

I remember when this game first came out on the original Xbox – back when Circuit City was still a thing. I was excited to pick it up, and quickly fell out of love for the dark environments.

The version I’m reviewing is a port, played on Xbox One: as are a lot of my reviews of Xbox games these days, as they’re the most easily accessible (and documented) on the updated system.

Doom 3 also received an update since that fateful day I picked up a copy. The dark environments forced you to use a flashlight or a weapon – while the update allowed for the flashlight to remain on while wielding a gun, etc.

While the flashlight still drains, this change made the game more accessible for dolts like myself… though I wasn’t quite on board with Doom 3’s approach at first either. The first two Doom games were simple run-and-gun to the exit first person shooters. Doom 3 takes a more narrative approach, adding a PDA (ahem, tablet computer for you youngsters) to check emails, audio/video clips, and your inventory.

The PDA is essential for knowing some objectives or getting codes to storage lockers, which are typically stocked with a gun you may not have acquired yet, armor, and ammo. You will also use quite a bit of computer terminals and monitors throughout the game to unlock areas or solve minigames.

The extra computer/tablet content also widens the depth of the game, as you play the titular role of a space marine who is stuck on a Mars research facility that just so happened to also open a portal to Hell.

The dark environments are often covered in blood and guts, and you’ll fight zombified humans and demons in tight corridors that ratchet the game back to its roots.

You also encounter some NPCs, some friendly, and some, well, no spoilers here…

Having played every Doom game created, I was upset with myself for taking so long to give this one its rightful time. Looking back at a 2005 release, this game was pretty groundbreaking even if the pace wasn’t “arcade” enough for me way back when. The visuals hold up well, as Microsoft always had their eye on creating HD content even back when the first entered the video game console market.

The audio is full enriching, with gun shots, explosions, and the occasional creepy whisper of something not of this world. I won’t say that this is survival horror at its finest, but the game pushes enough buttons to creep you out at times.

Speaking of buttons, the controls are tight as well, and there aren’t many sections that require stupid jumps or tightrope walks leading to cheap deaths. You can also save at any time which is a lifesaver for some of us who need to take our gaming sessions in small chunks.

The best part of Doom 3 by far is the weapons.

Everything you could want is here in this edition, from the classic shotgun and chainsaw to the BFG. As the game progresses you get a sense of your own progression – and some over-the-top classic bosses top the cake.

Like practically every other Doom game ever made, Doom 3 holds its own as a unique entry which serves as a bridge from the old FPS run/gun style to a more in-depth experience worth checking out if you’re a fan of the series or any first person shooters.

Whoa Nelly… after playing Doom for the SNES and getting that nostalgic feel back in my veins it was time to challenge another Doom title I had long since forgotten about: Doom 64.

Let me tell you, I’m glad I checked this one out, because it made me forget the bad taste Doom for the Super Nintendo had left. Now, don’t get me wrong, the entire experience of Doom for the previous Nintendo console shouldn’t have been possible; even playing it as a youth was satisfying, but the sprites just killed my eyesight after a while.

Enter Doom 64 on a beefier set of hardware with an analog stick.

All I can is wow.

The game runs smooth as butter and feels like a polished title. Even after all of these years it’s something you can pickup and play rather easily, that is, except for the breakneck survival feel of the game in general!

Yes, Doom is a “run and gun” first-person-shooter (FPS) and largely defined the genre. But with Doom 64, you’re not missing a beat. Doing some research for my review, this game is widely regarded as one of the best Doom titles ever and I can sense why. There’s no stutter or lag in the gameplay, the sound is off of the charts and the option to brighten or dim the display, for those dark corridors in which you will feel your heart racing, all add to a great experience that’s still as fantastic now as it was back in 1997.

Doom, FPS or retro gaming enthusiasts would be missing out if you don’t give this game a spin!

Some people probably aren’t aware that Doom made it to the Super Nintendo. In fact, it should’ve been technically impossible to do, if not for the addition of the Super FX 2 chip.

I, for one, forgot this game existed until recently and revisited it based on having rented it numerous times during my childhood. The premise, of course, is a first-person shooter where the protagonist fights through invading demons from Hell.

Yes, this game was on practically every platform ever, however it wasn’t only the technical limitations of the SNES which made this a surprise, but the content: Doom is all about shooting, killing, horror and gore! Its generally recognized as THE title to popularize the FPS genre and is best known for run-and-gun gameplay where you fly through levels and try your best to not die.

That last aspect, speed, is well-translated to the SNES version. I often felt a heart-pounding intensity to finish each level, set to revised audio tracks which still thump to this day and made this game playable… because the graphics, an obvious setback, made it a struggle to do otherwise. Enemies were often difficult to see in the distance and were pixelated, as you might imagine on 16-bit hardware, even when they were up close.

Truth be told, even with cheats enabled in spots, this game was rough to play through the first episode, where I left off. (In total there are three episodes, a total of 22 levels lifted from the PC games.) The visuals were rough enough on the eyes and almost made it feel like the game had an unfair advantage on the player. (The game ran on a bordered window within a window in order to have a respectable resolution and framerate!)

Ditto for the controls, which were also tough. I mean, come on, it is a D-pad on the SNES controller!

Yet, for its shortcomings this game didn’t age terribly bad. You already expect the worst and it’s totally playable for the time, if not an enjoyable experience overall. I couldn’t justify spending time to complete it due to the few shortfalls, but, I’d still recommend it to any Doom/FPS/retro gaming fan just for the technical achievement of being playable on the Super Nintendo back in 1995!