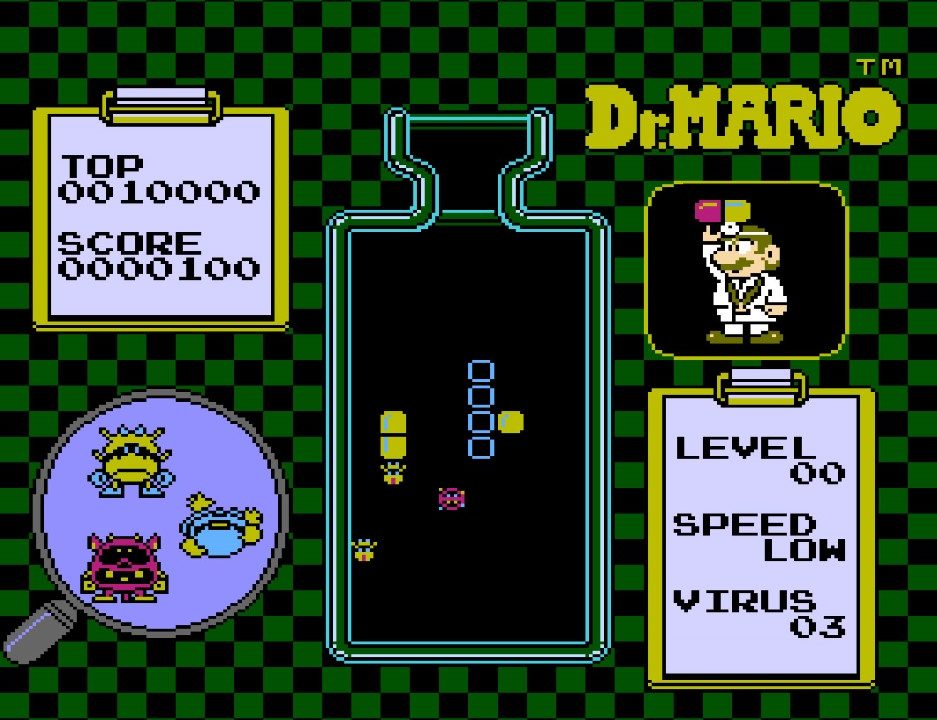 If you were to tell six-year-old me while growing up, that puzzles games would be some of my fondest memories, I’d probably look at you confused – because I’m only six, remember?

Seriously though, puzzle games? The mere mention of the word puzzle brings to mind grandparents doing crosswords or the word jumble in the newspaper. Not video games.

Yet, two of the most influential video games in my life were both puzzle-based. First, there was Tetris which dominated the life of anyone who owned a Game Boy.

Ah, yes – let’s slap the plumber on this box and sell it like hotcakes. Afterall, all things Mario were hot. Nintendo at this time could do no wrong. Super Mario Bros. 3 had released months earlier as a blockbuster larger than some summer movies. The Super Nintendo and another Mario title was on the way with Super Mario World – but somewhere in the middle is where Dr. Mario landed.

Initially this is a game I missed as a kid. Some parents were apparently up in arms over the doctor/drug theme, but for myself, the puzzle game looked like a rip-off of Tetris. (How dare they?!) Little did I know years later how many times I would play the NES original, and its many sequels, with my girlfriend and wife-to-be.

Dr. Mario is considered one of the best NES games ever made and with good reason.

The premise is simple: align four blocks of a single color in a row, either vertically or horizontally. The blocks can be made up for the three colors of viruses, red, blue and yellow, which are randomly placed at the start of each level and must be eliminated to move to the next.

Strategy is incorporated in many ways. Each pill contains only two of the three colors, so you do not want to block your ability to gain four in a row of a single color. You may also use the edge of one pill to eliminate other rows and columns, with the extra piece breaking off and falling lower in the stage.

In this manner, savvy players can clear boards quicker – critical to victory as gameplay speeds up throughout each level to a breakneck pace. The amount of viruses are also predetermined as you level up, but players can also set this, as well as the speed and catchy tunes of the game’s timeless soundtrack, in the main menu.

In two player mode the game remains essentially the same. Players split screens and attempt to beat the other by clearing their stage first. When clearing two or more rows/columns simultaneously, extra one-bit pills fall on your opponent’s stage, which usually clogs up their plans to eradicate the viruses.

Explaining the dynamic might be more difficult than actually seeing the game in action – and there’s a real ending to it as well, which, I’m so far removed from my peak Dr. Mario skills that I prefer to show you a YouTube clip of someone who’s done the hard work for me.

If you’ve never played Dr. Mario, well, you’re missing out. It’s a good solo romp as well as a great game to play in tandem. The are numerous follow ups which build upon one another but retain the same core game play too – in fact, Dr. Mario has appeared on nearly every Nintendo system, with this game spawning yet another subgenre in which the famous plumber printed money for his creators.

If you haven’t indulged, I highly recommend this game – and series – especially if you are a fan of puzzle games.