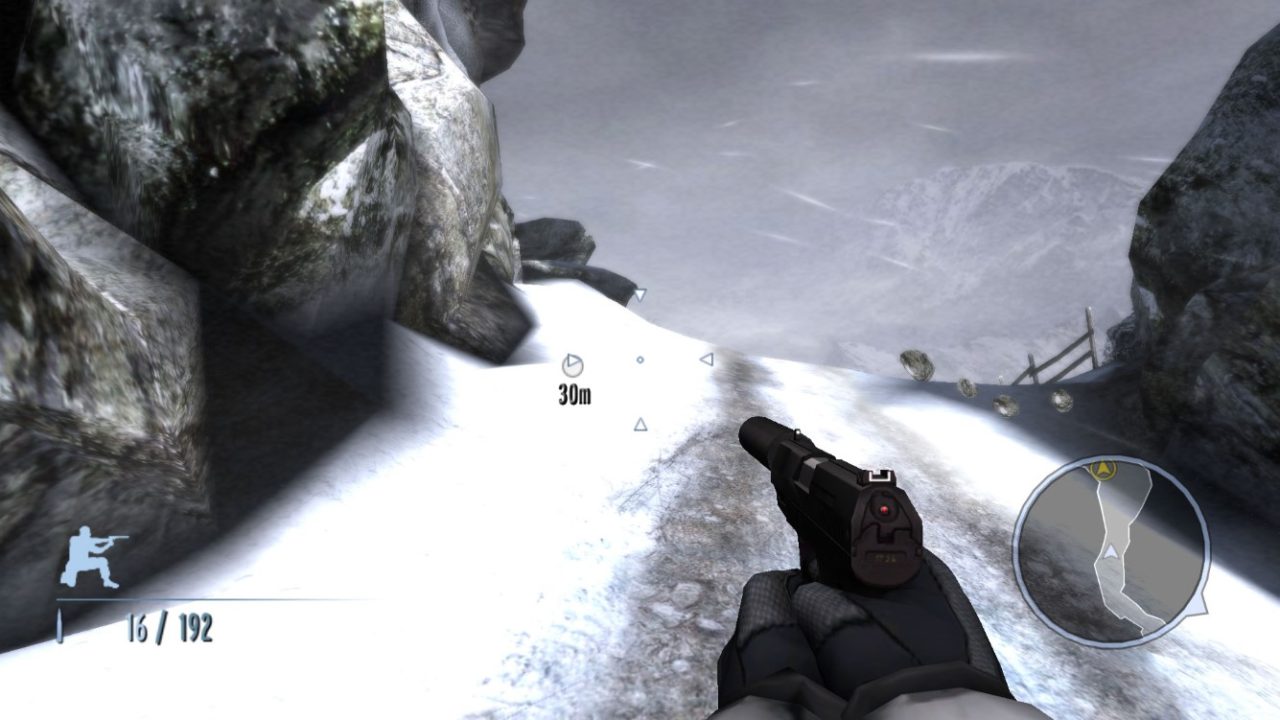 It’s almost criminal that this game isn’t mentioned more often among the GOATs of FPS shooters, particularly in the James Bond 007 franchise.

2010 brought about a buzz when Activision acquired the James Bond license and announced a reboot of one of the most influential console first person shooters ever made: Goldeneye.

In this iteration of Goldeneye, the settings are familiar but like the movie series, it has been completely retooled with its new Bond lead, Daniel Craig. For me, this is over the top and very ambitious – could Activision and developer Eurocom pull this off?

The answer is a resounding yes – so much so that I wish I had a higher rating on this site for a few games that stand out in a category all their own.

The first edition of Goldeneye 007 was released on the Nintendo Wii, and is thus the copy I reviewed here. There’s something off about the “remastered” versions that came out one year later for the PS3 and Xbox 360 – namely, even the first level is laid out a bit differently, and some of the voice acting parts seem to have been cut – leaving me less than impressed I stuck with the original.

We all know the Wii wasn’t an HD machine, but playing this in an emulated state greatly sharpens the graphics and there’s a “film grain” effect to the Wii edition that’s missing from the later “remastered HD” versions.

Plus, playing with a Wiimote and nunchuk is totally satisfying, to a degree, when it comes to the FPS genre. (It also gets annoying in firefights, so I opted to use the Gamecube controller later on, but the classic controller is also supported.)

2010’s Goldeneye recasts all of the actors, minus Judy Dench’s “M” (who has appeared in quite a few films). The settings and plot are all similar, albeit tweaked to match 2010 rather than 1995 when the original film was released.

What that means is that Bond is using a smartphone instead of his Dick Tracy style watch, and that the Goldeneye installation is now part of a solar array.

The tweaks are subtle, and as part of a reboot with Daniel Craig, it hits just right. If this were a movie, it would’ve been a blockbuster, and you get that sense every step of the way playing it.

All of the Bond gimmicks are here and then some.

The game is filled tons of fan service. I swear you’d think this was a Michael Bay production. From the start, you get the same overhead pan of a dam somewhere in, IDK, Serbia? I forget… not the point however, as it brings you back to the N64 days of Goldeneye with Pierce Brosnan. Yet, after you pass a security tower and a tunnel, the game starts to shine immediately with booms and bangs, and you get a sense for how much more polished every detail is.

Carried over from the original game are most of the levels, including the dam, the library, monument park, and a thrilling tank drive through town.

The computer AI is solid as a diverse cast of recurring enemy mercenaries floods the screen, finding cover, ducking and diving about.

Stealth is a huge component of this game, as a run-and-gun style will often get you killed on the spot. The big gimmick is holding the L trigger to zoom in while aiming, as the game eschews your typical “auto aim” feature to hone in while shooting. Your gun will often vibrate or move, realistically, making it harder to hit targets as well.

You can duck behind cover, and use this feature to pop up to shoot.

Other stealth items include shooting security cameras, hacking into drone guns, or simply waiting out entertaining conversations between soldiers – who will move on on their own without any other interaction needed on your behalf.

Beware, however, that one wrong misstep, such as shooting a soldier conversing with another, can bring an onslaught of armies headed your way!

There’s so much packed into the single player campaign that I didn’t even get a chance to review multiplayer unfortunately. Yet, that’s a testament to just how complete and satisfying of a game this is.

It’s so darn good that I now wish I hadn’t put off finishing this one for so long – and would love to see this translated onto the big screen as a real Daniel Craig reboot too!

The World Is Not Enough

I have to make some apologies for what I said about this game in other 007 reviews: it’s much better than I remember it being.

That said, the story mode is what really makes the game shine, as multiplayer didn’t hold a candle to Goldeneye or some of the follow-up games on the PlayStation 2 (such as Agent Under Fire). However, that’s no reason to skip on EA’s James Bond movie tie-in, as without Goldeneye stealing the spotlight for both a great FPS and credible movie licensed game, this one may have been more fondly remembered.

The controls are a bit funky to get used to, as is the off-centered, nearly “in the corner” gun view, but the rest of the game actually looks more realistic than Goldeneye did, following the same script as its movie namesake.

Also bare in mind, this is not the same game which shared the same name and movie tie-in on the PSX.

The visual style of the game differs from others in the Bond series slightly, but it’s a smooth experience with a lot of the other 007 effects left in place (including tons of gadgets used to complete obstacles). Seeing bullets fly from the weapons was also a nice touch which wasn’t often seen (or as detailed) in other games released at that time.

A wide variety of weapons are also at your disposal, including a harpoon gun!

Overall, the game differentiates itself enough from Goldeneye and other EA published 007 games that it stands on its own and should be a title played by Bond fans who are looking for a retro, FPS fix.

While I was knocking Electronic Arts for screwing up other gaming franchises, I had totally forgotten about a true contender as a Goldeneye successor: Agent Under Fire.

While stumbling with its first foray into the Bond franchise, after acquiring the 007 license with the N64’s The World Is Not Enough, fans would be skeptical to jump on this game. After all, Goldeneye (which was developed for the N64 by Rare) was and still remains a cult classic.

Wisely, EA learned their lesson from their first flop and took the best objects that made Goldeneye a success and ramped them up. Unfortunately, I feel this title may not have gotten the same warm and fuzzy memories as it may have deserved.

For starters, Agent Under Fire is an original story and not based on any of the 007 IP or movies though I had started as a World Is Not Enough version for the PlayStation 2, and while Roger Moore was intended to be cast as the Bond character, a little known actor fit the bill instead before Pierce Brosnan would re-sign to reprise the character for the franchise.

Thus, Agent Under Fire continued on as an almost entirely unique project that was still intended to be a spiritual successor to Goldeneye. And in many ways, it was.

Several nods to the N64 classic can be found in AUF, including the Golden Gun, many of the weapons, crawling through ventilation shafts, or elevators which take you through various stories of a building.

Sniper rifle zooming in and out is also here, and perhaps less nerve-racking as the heavy breathing and erratic movement of using the long-range weapon are gone.

Added are some secondary fire functions to some weapons, and a slew of “Q” tools which turn 007’s flip phone into anything from a laser to a grappling hook.

Nods to previous Bond movies also include a jet pack (which zooms you into the sky) and “rail” levels where Bond is shooting from a moving car or rail cart.

Driving levels are also added for the first time and feel a bit out of place, but at the same time will remind anyone familiar to that of the Grand Theft Auto games. (The size and scope are actually quite incredible as add-ons to the FPS action.) Both of the vehicles chosen are also nods to the entirety of the Bond franchise, which is a great touch.

Special medals are awarded with the traditional James Bond theme playing while executing special achievements in each board. Completing these achievements unlocks special goodies, such as the aforementioned golden gun (which for some reason, doesn’t instantly kill enemies).

I’d also be remiss to mention the level of detail that went into this game, down to the discharged bullets flying out of guns to snipers putting their rifles down and pulling out pistols when you’re discovered nearby.

Multiplayer is of course a big draw here too with splits-screen action that sees red lasers honing in to your eye sights or grappling across the levels.

The only drawback to this game? Some of the boss battles or objectives aren’t obvious as to what it is you need to do to win. Checkpoints are few and far between, meaning your unintended death (due to not knowing where or how to complete the objective) means you start over from scratch.

Regardless this is my favorite of the Bond games next to Goldeneye and it holds up very well even with the jagged old PS2 graphics. If you enjoy first-person shooters or 007 (or both) I highly recommend checking it out.

This was the game to have back when I was in high school! Between this and Perfect Dark, it was the sole reason to buy an N64 when PlayStation was starting to dominate the landscape. (And the Sega Genesis already trolled Nintendo as a “kiddie” system.)

There was a lot to question when this game came out. Rare is making a first-person shooter published by Nintendo? And with a movie license? (Back when licensed games were dumpster fires!)

This game really broke down some barriers and introduced all of us to why the N64 had four controller ports built in! Many nights were spent on the missions or packed in a room with friends playing four player split-screen games.

Whoever got the golden gun first, look out!

The boards are all memorable. The unlockable items were as well. This was just so great of a game that it’s definitely one of my favorites of all time.

Notes for my emulation enthusiasts

This ran better on my PC than a second-gen Fire Stick, so beware. N64 games tend to choke on certain hardware. I actually played this through with some lag (major lag in certain spots with explosions or large open areas) but then ended up starting it over on the PC.

I just can’t put this game down!