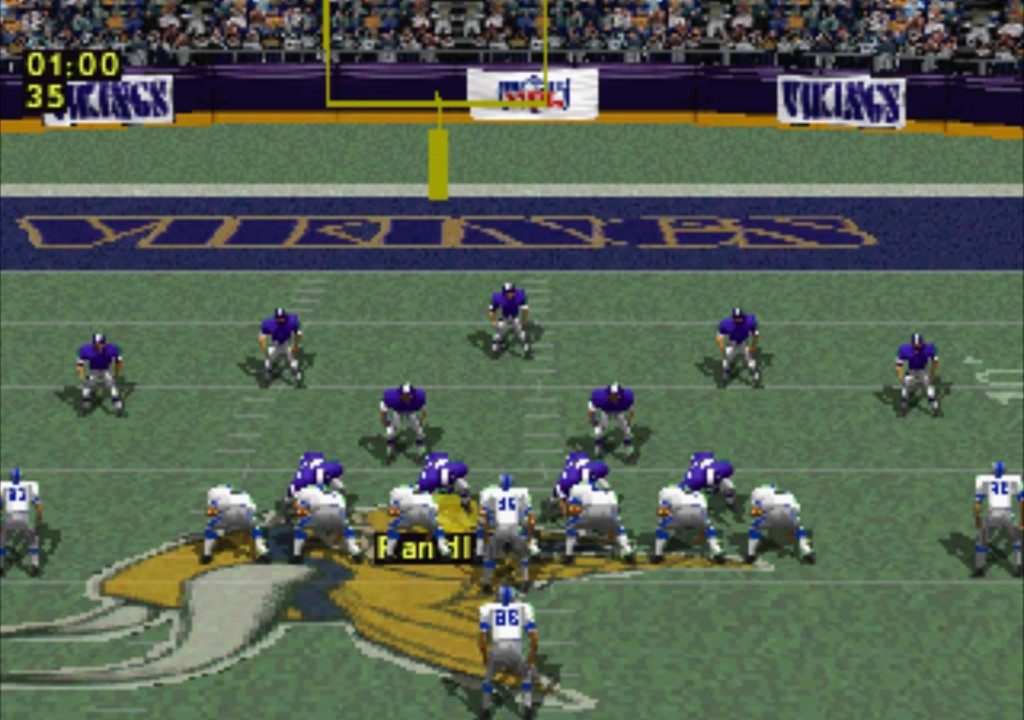 Sony’s PlayStation took the world by storm and in 1995, it’s best-selling game was one that got the jump on EA’s Madden franchise.

NFL GameDay launched on the PSX heralding a new era of what could be done with CD-based games. While John Madden Football struck first on EA’s 3DO platform a year earlier, the expensive console had difficulty penetrating the market whereas Sony’s first foray into video games came in at half of the price, with game titles often selling for nearly half of what kids and parents paid for cartridges with the previous generation.

With EA scrapping their first Madden game for the PlayStation, NFL GameDay had free reign for a year. While it did a lot of the same things that Madden for 3DO got right, it also had its success and shortcomings.

Ah yes, everyone’s biggest complaint with disc-based games actually wasn’t too bad here. The initial startup menus are preceded by animated full-motion video (FMV) of NFL logos and helmets, along with a catchy tune that would play interspersed throughout the game, along with a riff ripped off of Queen’s We Will Rock You in-game. (Which, actually gets a little annoying, but can also be turned off in the options menu!)

Whoever designed this menu likely designed prisons for a living at some time. Rather than logically scroll throughout the options with the D-pad and use the X button to confirm, as has become standard, nearly every freaking button on the controller is used just to get the game set the way you want.

You choose a visiting team with the L1 and L2 buttons, home team with R1/R2, and the D-Pad scrolls up/down the main menu.

But beware: it’s almost indecipherable to attempt to change your default in-game controls. Ditto for setting up time for quarters and weather situations as well. (For example, you need to use the left arrow of the D-pad to get over to the menu to change quarter length.)

Once the NFL stopwatch let’s you know the game has stopped loading, you’re treated to a team-themed screen that changes to a primary color of your selected squad once you move the player left or right. This jumps right into the coin toss as to not waste anymore loading time – another nicely optimized and well thought out decision by the developers.

You then move into the kickoff mode, which moves a bit faster than Madden players may be accustomed to. It’s at this time you realize the stadiums don’t bare any resemblance to their real-life counterparts, other than teams who played in dome stadiums getting a generic indoors building immune from the four weather conditions you can set: sunshine, rain, snow, and windy.

The outdoor stadiums all look the same as well, with an NFL logo in the center of the field.

The differential of the home team’s stadium places team logos around the 30-yard line on each side, and of course, custom endzones. Some fan banners also hang around the place, but unlike Madden’s sidelines, these ones are absent of detailed touches such as referees with yard markers, teammates on the bench or even referees.

Instant Replay exists, as does an option lifted from Sega’s Sports Talk series where you can change the view from a slightly overhead, behind the quarterback look we’re all used to, to one that zooms in closer behind the action. You can also swap in an isometric look from the days of Play Action Football on the NES or go completely sidelines in style with a Tecmo Bowl look as well. Play also zooms in on an active runner with the ball, which is a nice touch.

Most of these are rather distracting, especially with the cool addition of the highlighted blocks beneath your selected player, which states their last name – as the game has a full NFL license in addition to the NFL Player’s Association.

However, the NFLPA addition is a bit misused with the lack of menu options in-game. You will get a notice of names and short stats, such as “so and so ran for X yards”. The presentation here gets closer and closer to watching a real game on TV, but playing the game can be a struggle.

The playbook lacks any real diversity. There are a few basic formations which offer around 6-8 plays, if that, for each. You also have no clue as to what the computer is sending into the huddle, so you may pick a 3-4 defense up against a three wide receiver set – a mess to defend against, if the game wasn’t so awful at passing the ball!

This is likely one of the worst games to get used to throwing the ball and its anyone’s guess as to when and where it might go. The learning curve is so much I nearly broke a controller. (I’d much rather play Play Action Football on the GameBoy for what it’s worth.) It’s so bad, the computer rarely completes passes either.

Running the ball is effortless but you often run into your own blockers and defenders always pancake your back, on his back, with every tackle.

You can “feel” the tackles in this way, but it gets to be an old trick quick.

Another big gripe is not seeing down and distance on the screen’s HUD, unless you’re choosing plays. You can’t get a feel for how far you need to go to get a first down, because only the game and play clocks are displayed. A really shortsighted idea for a game that otherwise has strong features for its time.

Overall, the game is leaps and bounds above its competitors of this era in the graphics and audio departments, sans the 3DO Madden – of which it still holds up in several areas too.

For those who bought this game, they likely didn’t see the same flaws I’m seeing playing it years later. It was likely understood this was an entry into football games sort of title and as such, it was still state-of-the-art for its time.

As for nostalgia, a lack of any play-by-play or any audio bytes, lack of any B-roll or still photography to support the menus or in-game experience, and the looping Queen riff, added to the frustrating passing mechanics and paltry playbook make this a game to revisit if you owned it, but one to pass until later iterations catchup with the promise of the 32-bit generation.