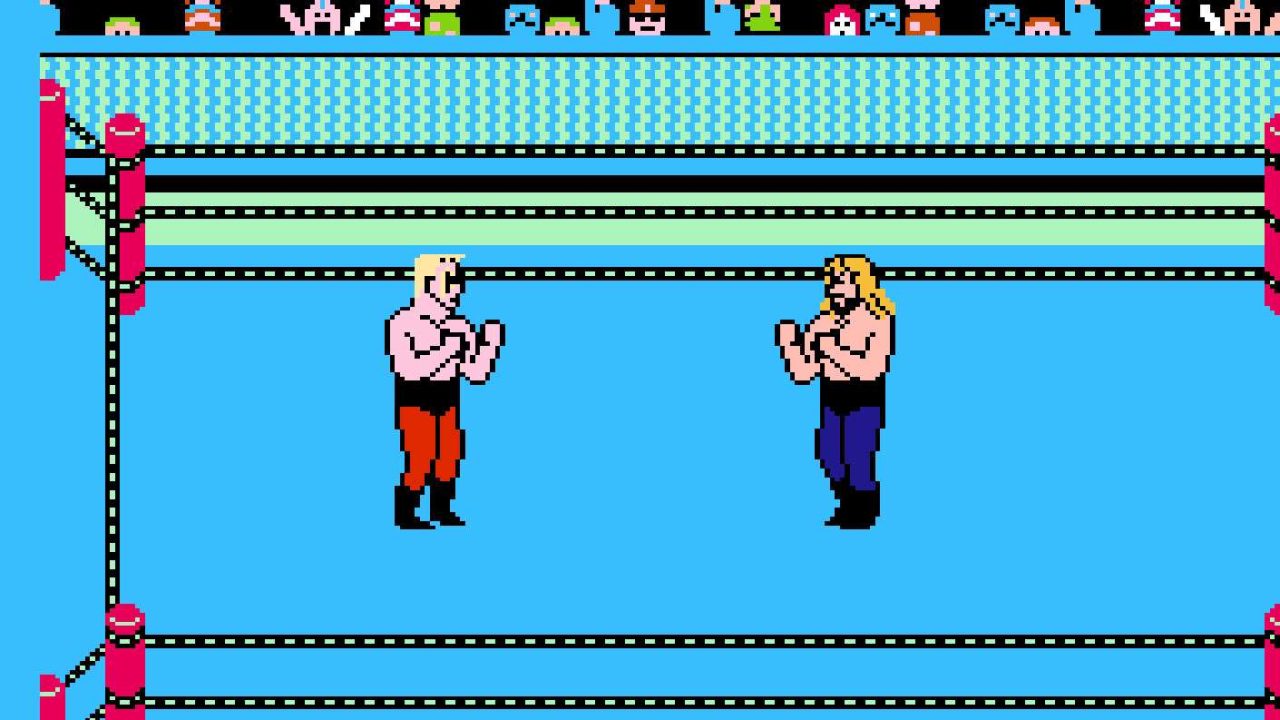 Welcome to the NES era, where the difficulty of 8-bit games often claimed the souls of young children.

None could be truer than the poor kiddo who unpacked this cool looking WCW Wrestling game. It’s wrestling, those are the Road Warriors on the cover (one of the biggest draws outside of the WWF at wrestling’s height) and this should be a blast…

Should be, because it wasn’t made by LJN.

It isn’t, because like every other wrestling game made during this era, its either:

This is true of WCW Wrestling, which looks cool and lets you move all over the place, including outside of the ring with even an isometric corner view.

There’s also a nice roster of wrestlers to choose from, none of which as any special abilities than the other aside from how they look. Everyone’s here, including Ric Flair, Sting, Lex Luger, Road Warriors Hawk and Animal, Ricky Steamboat, and then maybe lesser knowns outside of the regional territory such as Mike Rotundo, Steve Williams, Kevin Sullivan, Rick Steiner, Eddie Gilbert, and Michael “PS” Hayes.

The boss at the end of the game is a generic masked wrestler called the “WCW Master”, who can be unlocked to play with. (He’s actually based on Andre The Giant’s character “Giant Machine” in Japan, as this game’s engine was originally released there as a totally different wrestling game.)

You can also customize your wrestler’s move set before the match. But good luck using it – or getting any offense in.

As was customary at the time, jamming on buttons was necessary to success. Jamming on them here, however, usually ends up in poor collision detection where you can never land a hit on the CPU controlled opponent.

Despite the custom moves, you’re relegated to kicking and punching – usually landing neither. Your character is at the mercy of watching the CPU do all of the cool stuff, and should you happen to get off of the mat or kickout from a pin attempt, you’re most likely hitting every button known to man as fast as possible, which pressing A+B makes you run.

Then you run into a clothesline. Or a dropkick. Or any other cool moves you can’t do, but the computer performs mercilessly.

Thankfully matches are timed. That will make sure you’re out of your misery soon enough, because no other power bars or meters exist that show you if you’re ahead or behind your opponent health wise. Nope, the only gauge which exists is when you suplex someone out of a grapple, a power bar which eventually lands on full power, flashes the screen, and allows you to execute your special move.

Well, not you, but the computer.

It’s almost as if you’re playing Mortal Kombat in the arcade and were lucky enough to win two matches. Guess what’s next? The cheating CPU that will suck your quarters!

Except there’s no quarters. And there’s no winning – unless you trick the CPU into getting counted out of the ring at 20!

I have a real love/hate relationship with wrestling games from this era, and WCW Wrestling is among the worst of them. While it presents itself as more of a pure wrestling game than LJN’s WrestleMania fare, it’s still a turd that should be long forgotten aside from the cool Road Warriors pose on the cover.

Avoid it unless you enjoy terrible video games.

After dealing with the limitations of the 8-bit era pro wrestling games, WWF Super WrestleMania came along and blew everything out of the water during the 16-bit era.

Interestingly enough the Sega Genesis and Super Nintendo had different versions of the same title: this one reviews the latter which had a larger roster, and obviously better graphics and audio as opposed to the competition.

The graphics, audio, gameplay, roster and everything just about trumps any of the NES era WWF games. When you first start the game, however, LJN had to keep their logo onscreen until you hit the start button – a minor annoyance but one found throughout the game at times.

The next step was your traditional start menu, which then led to an amazing discovery that you could play with not only tag teams, but a four-man “Survivor Series” style match as well.

You select a difficulty level next and then get to choose from one of ten wrestlers, including Hulk Hogan, the Macho Man, and the Road Warriors – the rosters were the main difference between the two games, as the SNES was lacking the popular Ultimate Warrior. Aside from Hulk and Macho, both versions only shared The Million Dollar Man Ted DiBiase as well.

Otherwise, the available wrestlers were vastly different, including the Undertaker, Sid Justice and Jake “The Snake” Roberts, plus two tag teams: the aforementioned Road Warriors and the Natural Disasters.

Ring introductions looked cheesy, but the fun, if you will, begins after the bell.

The visual life bar was a major help in the new 16-bit era, but everything else was ramped up – with more buttons on the controllers themselves, you were now able to do much more with your wrestler, such as running or climbing the ropes.

You could even brawl outside of the ring, but beware of a count-out! (Heck, let’s gone one further: there are announcers ringside and a referee in the ring!)

Yet, and quite honestly, this game still suffers from the “pickup and play” issue most pro wrestling games do. You often grapple with your opponent, a commonality with the 16-bit era games, but in Super WrestleMania there’s no “tug-of-war” bar to know who is getting the upper hand.

You’ll often come out of the grapple with a simple headbutt… or if you’re close to the ropes, you might throw your opponent over the top rope.

There were no signature moves in the SNES version, which is a bummer – you’re pretty much stuck to suplexes and body slams. However, the character selection menu has a nice treat. If you stay on one wrestler for a few seconds, their entrance music plays.

Overall, this was a step in the right direction for the wrestling genre, but it still lacked the ease of mastering. Grappling appears to be related to AI cheating, and figuring out how and when to pin your opponent meant matches lasted 20 minutes or longer in some cases.

There are better wrestling games on the platform, but then again, in 1992 this title was groundbreaking. It’s worth having a look just for the progression from Super WrestleMania to the next games in the series.