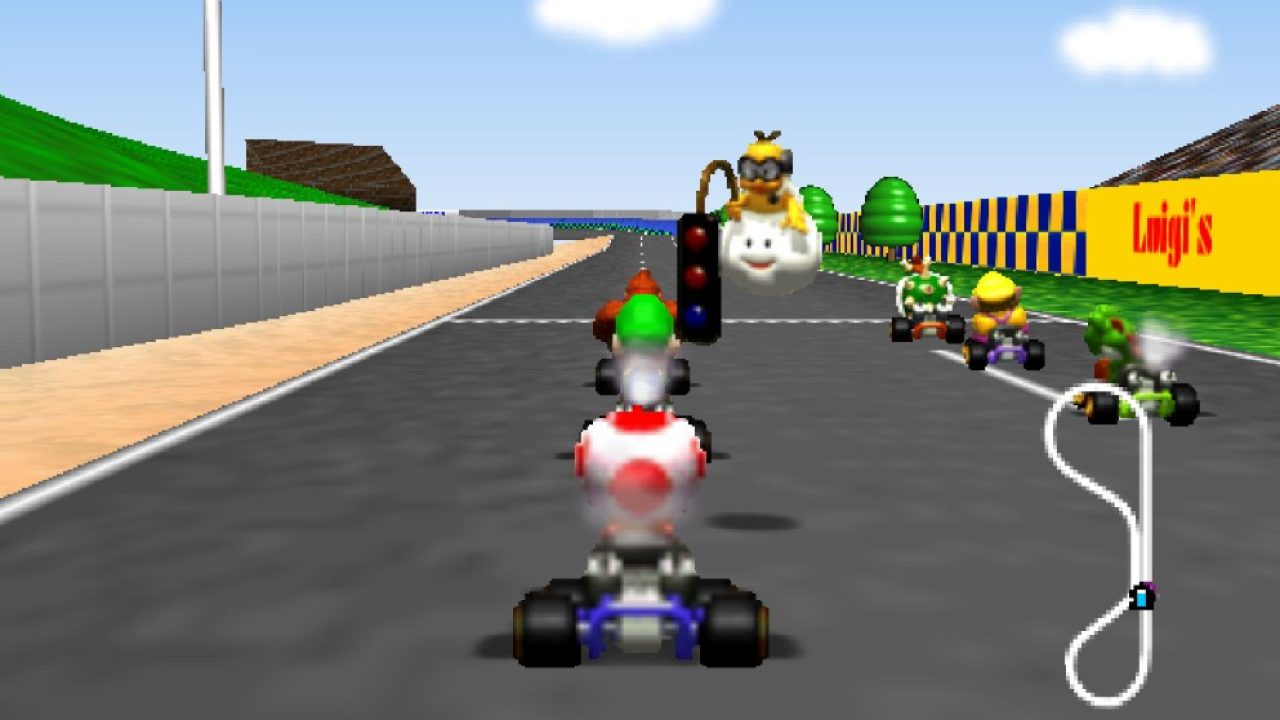 Mario Kart 64 was a landmark title for the Nintendo 64. As the second entry into the series, it was the direct sequel to the massively popular Super Mario Kart on the SNES, and became the N64’s second best selling title of all time.

According to Wikipedia (since I’m too lazy to retype this) Mario Kart 64 introduced the following:

Honestly, over the years, these games meld together in my brain, but you can see where a great deal of influence on later iterations comes from. In fact, you can pick up this game and pretty much play it to the degree of any other Mario Kart game – that’s how familiar the mechanics and game play are tightly wound.

Quite the achievement for only the second game in the series!

This one, in particular, just feels right from the jump. The 3D graphics were new to all gamers at the time, with everything jumping to the realm. Four player split-screen was commonplace, as people crowded around a TV to play many of the multiplayer offerings the N64 had. Plus, the three-pronged controller featured an analog stick and the z-trigger underneath, which still to this day feels so perfect despite an odd-looking layout.

In-game, you can expect the same cheap, cheating computer opponents that have always plagued Mario Kart games! The items noted above, some still around, some now a memory, will have you living in nostalgia.

And if you’ve kept up on the series, most of the game’s tracks have reappeared – some more than once – in later iterations. This once again points out MK’s jump to 3D and how the base game formula, while not being altered too much in sequels, remains strong.

For retro gamers, Mario Kart 64 is a must-have in your library. Everyone from the little kid to grandma can pick it up and play. The fun level is through the charts, especially with friends – and while its simplistic in nature, it’s also difficult to truly master.

Mario Kart: Super Circuit is a cult classic that’s sort of an oddity as well. That’s because it was released for the Game Boy Advance in 2001, five years following the Nintendo 64’s sequel to the Super Nintendo original.

However, the GBA version here, despite being a 32-bit platform, more closely resembles that of its SNES predecessor than that of the N64.

Although that sounds like a knock in my review, it really isn’t. Many of days and nights were spent with this title in hand mastering a whopping 40 levels, which was the most of any Mario Kart game up until the Wii U’s Mario Kart 8 (which only trumps it by adding DLC).

New to the series was the concept of bringing back levels from the previous SNES game, denoted here as “extra” levels and unlocked as you complete each of the Super Circuit cups: five of them, which is also an uptick from the series’ usual four-per-grand prix.

The game plays much like you’d expect, tightly tuned to its controls despite having to once again use a D-pad in lieu of an analog stick introduced with the N64 controller. Regardless, it’s still a fun romp, with the usual nine returning characters as well as all of the same items.

There are some carryovers from the N64 game, but Super Circuit is at heart, and in my opinion, a direct sequel to the SNES original as it was unable to achieve a lot of the new 3D features that the more robust N64 could accomplish. In spite of those limitations, this game is much more polished than what was capable on the Super Nintendo, and shares a closer link with its successors just based on the art direction.

I also like how the sprites are made to appear three-dimensional with a lot of different scaling and scrolling effects, not only on the opening menus but throughout the game. Some of the finer details include getting frozen (as in covered in ice) if you fall into a pit in Snow Land or seeing karts that are ahead/behind you fly above an overhead pass. Some levels also change from day to night or vice versa as the sun rises and sets.

The audio tracks are what you’d come to expect: catchy and used to where they don’t become too monotonous.

The game modes are a plenty, with the handheld nature of the GBA allowing for up to four players to link up against one another simultaneously too.

While you’re unlikely to dive into GBA games anytime soon, this title lives on with some stages reappearing as “retro” tracks in later iterations of the series. (Although there are several stages which I never want to see again… cough… Cheese Land… cough… why Mario Kart 8, why?)

As this game has been reissued in other spots, completionists and Mario Kart fans should definitely give it a look. The large number of levels and unlockables (despite no unlockable characters) will keep on busy for quite some time. The visuals aren’t so shoddy either that they’ll eventually turn you off from playing, which his maybe my biggest gripe for a game that should’ve never been on the SNES!

The trendsetter for all “kart” racing games holds up very oddly when reminiscing for this review.

Let’s start with the basics: no one thought a racing game based on Mario characters was ever going to work. Yet it did, and here’s why.

First and foremost, Super Mario Bros. is a beloved franchise with even more beloved characters. Each of the stages, which in this Super Nintendo title there aren’t many (later stages are extended rehashes of the same level, with added elements or driving through them backwards, which is now known as “mirror mode”.)

Yet, those stages had a sort of charm, that when combined with the same Mario-inspired power-ups, added a new dimension to your traditional racing game. It’s akin to bumper cars but within a video game.

So, what issues could I have with this title? If it were 1992, not many. The audio is crisp, the controls, despite using only a D-pad (there were no analog sticks at that time) were tight, the difficulty adjusted appropriately throughout and more.

In fact, this game shouldn’t have even been possible on a 16-bit platform, but thanks to extra processing chips within the SNES, it was groundbreaking. Yet, it’s not exactly the best to go back to. There are some frustrating areas of the game and I attribute much of that to the dated graphics and controls.

Still, for a Super Nintendo era game to accomplish what Super Mario Kart did, as well as establishing an entire new genre of games (and spawning numerous, award-winning sequels) it’s hard to be so down on this game.

Go back, appreciate this for what it was at that time and then move forward to see how each title built upon the previous: because that’s what I’m going to do!