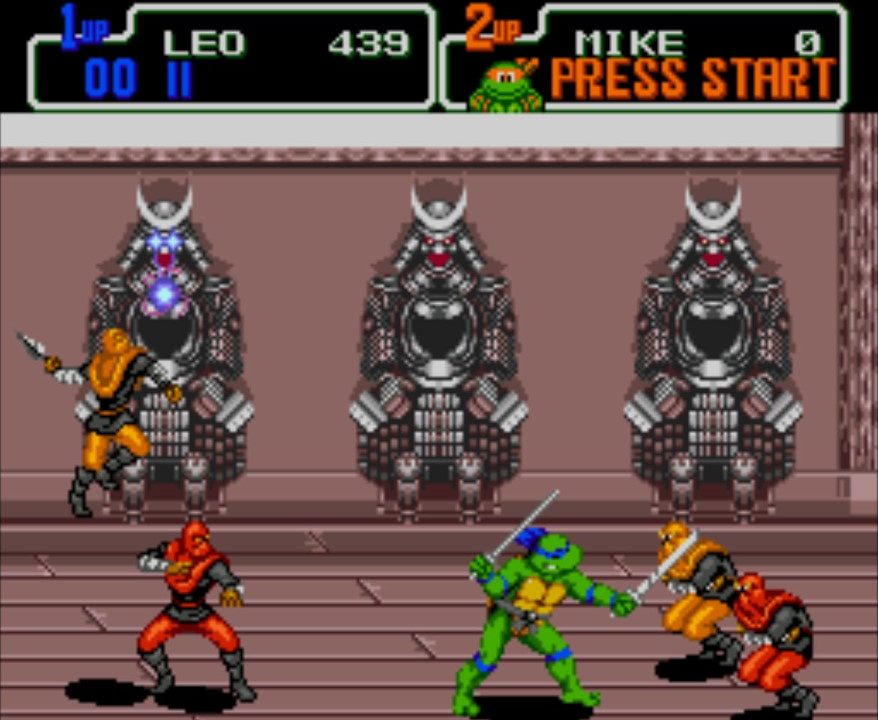 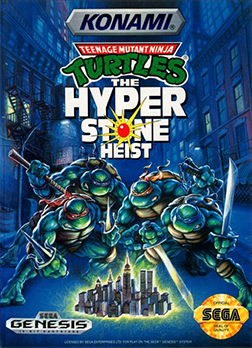 Where do I even begin with this game?

Anyone who has followed this site for some time knows my love of the TMNT arcade games. Those games were ported to home consoles as TMNT 2: The Arcade Game on the NES, and TMNT 4: Turtles in Time on the SNES. A third game mimicked the NES style port of TMNT 2 as well, titled TMNT 3: The Manhattan Project.

All of the titles were well-rounded beat’em up games which were faithful to the entire lore of the Teenage Mutant Ninja Turtles movies, cartoon, comic book and/or toy line… unlike the disaster which was the first NES TMNT game that was anything but!

With many developers have exclusivity rights to their games with Nintendo, it’s no surprise that none of those games appeared on the competing Sega Genesis – a console which was a rival of the Super Nintendo in throughout the 90’s. In order to get around contracts and licensing, developers would often re-release games under different titles, with slight modifications, on the Genesis.

Some of those modifications were often necessary due to the Genesis being a bit underpowered compared to the SNES hardware, yet a leap in a generation over the 8-bit NES.

It wasn’t until Mortal Kombat was released that games were published on multiple platforms, therefore, while the SNES got the arcade direct port of Turtles in Time (the arcade TMNT sequel and labeled “TMNT 4” on the console) Sega’s console would receive a modified version of the TMNT 4 game.

Being a fan of the series, more of these games should be a good thing, right? Well yes and no.

If you were a Genesis owner this was the only way you’d be able to play a TMNT beat’em up game and in that regard, it’s a solid title. The graphics and audio are truer to the arcade source material than the NES versions, but obviously inferior to the SNES TMNT 4 in almost every way imaginable. The Genesis lacked the same array of colors and the “Mode 7” motion graphics capabilities of the SNES, making Hyperstone Heist a flat, drab looking game at times. A stark comparison to the eyepopping visuals and colors of TMNT 4 on the competition.

After playing the other games, anyone would also note quite a few things which were ripped directly from the other two arcade titles. First, the levels look almost the same. In instances where they do not, color palettes were changed. There’s also an obvious limitation of on-screen enemies, so the game does not lag much like the NES version – and like its cousin, the Genesis title lengthens the game by sending extra waves of the same enemy groups multiple times before proceeding through the level.

That cheap shot isn’t bad enough when you get confused by the level layout. A decision was made to not end each section with a boss battle, rather, the turtles randomly move from sewer to above ground or otherwise, to stitch together a “level” between 2, 3, or 4 layouts which then end in a boss battle. For anyone who played the other games, the awkwardness feels like a glitch or mistake. I actually replayed the first few levels just to make sure it wasn’t!

Initially the game looks and feels like the arcade games, that is, until you start to play it. Everything that made TMNT 4 a classic feels watered down in Hyperstone Heist. It’s a shame too as the game released four months following the SNES release. There’s no way to throw enemies into the screen, for example.

Nearly every element is lifted from the other two arcade games with very little new content. The five levels mostly comprise chopped off and repetitive pieces from the other games, which feels particularly out of place when you’re on the pirate ship (rebranded “ghost ship”) but the stage was hundreds of years in the past in the arcade game. “The Gauntlet” stage changes the color theme of the previous cave, from the prehistoric levels of TMNT 4, to have a “blue” floor that the watery Pizza Monsters could jump out of. Even the sewer levels in the other games had a “floor” and a “water” path you could jump between, but in this game they are broken into two different areas using the same brick walls at the top and either a floor or water: not both.

The levels are also all linear: there’s no moving diagonally up/down through any of the levels and the only auto-scrolling stage is the Technodrome elevator borrowed from the SNES.

Worse than not facing many bosses, you actually face the same bosses over and over. Leatherhead returns from TMNT 3 and 4. Rocksteady is another boss, but Beebop isn’t in the game: a dubious omission when considering the addition of Leatherhead of him. The human form of Baxter Stockman flying his machine around also makes a brief appearance in “The Gauntlet” stage.

A new boss, Tatsu, fits the bill as a leader of the Foot Clan ninjas. He, along with “Shredder’s hideout”, are among the only “original” ideas in this game. And at that, Shredder’s hideout is largely comprised of rebadged pieces from an added level to the NES TMNT 2 port.

That’s where this game really falls down: both TMNT 2 and TMNT 4 were ports which also added more content in the home versions whereas Hyperstone Heist feels hastily thrown together. I’m not sure if it had to do with the Sega vs. Nintendo legalese or an actual hardware limitation, but the Genesis title feels also feels like an imitation.

The game ends by facing the three aforementioned bosses in succession once more before battling the arcade versions of Super Krang and Super Shredder. Truly the only non-recycled piece of the game is a portion of Shredder’s hideout.

I understand there’s only so much you can do within the confines of the TMNT license, such as “fight ninjas repeatedly” but when all of the other three games include such great use of the source material, plus add more to their home game brethren, it’s hard to give this title anything more than the thumbs in the middle. Heck, even TMNT 3 on the NES has a “credits” scene at the end which scrolled through the enemies (rather than stay on one graphic and scroll names).

I would’ve expected much more from a next-gen title… It plays like the other games and has fairly accurate visuals, but in the end it’s sorely lacking anything to make it stand out on its own. 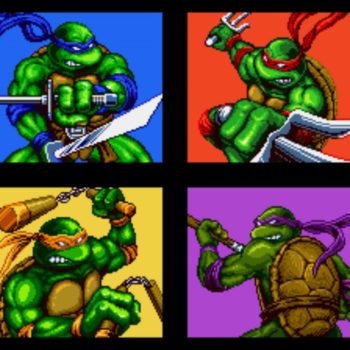 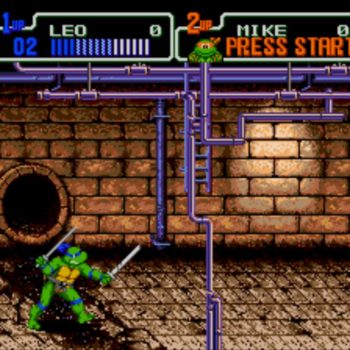 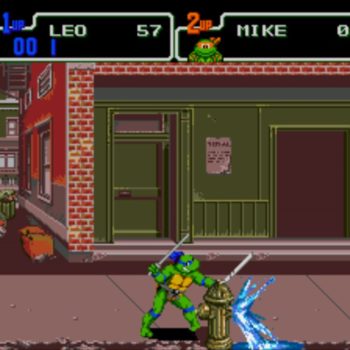 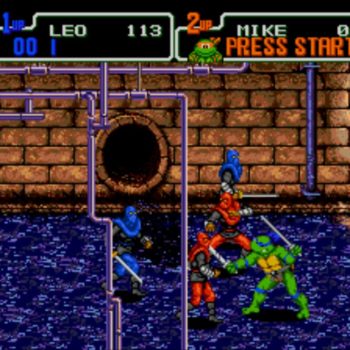 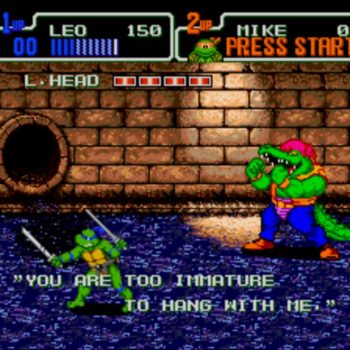 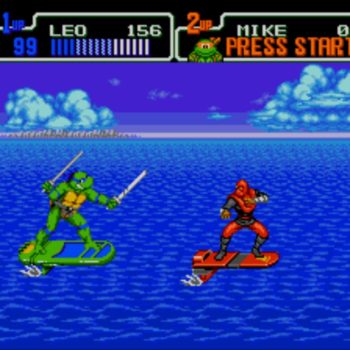 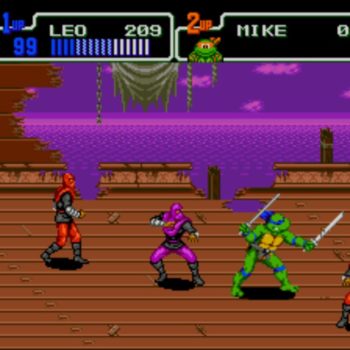 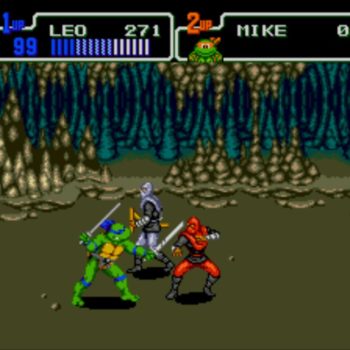 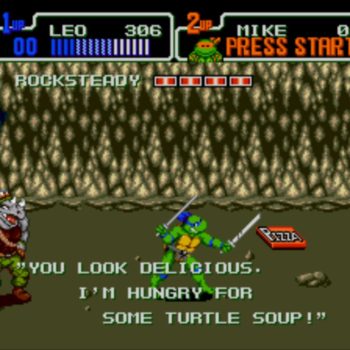 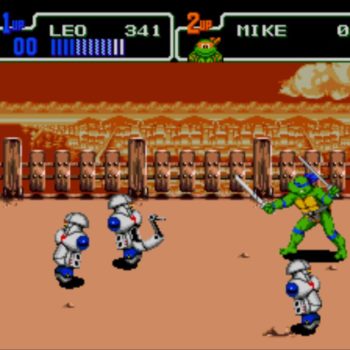 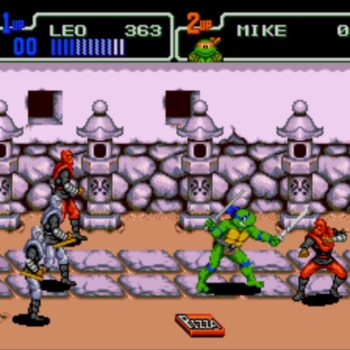 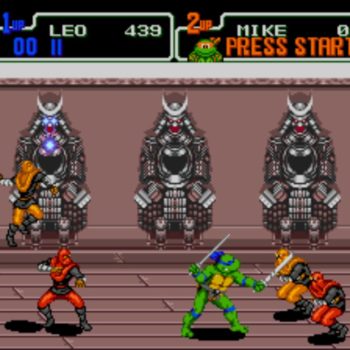 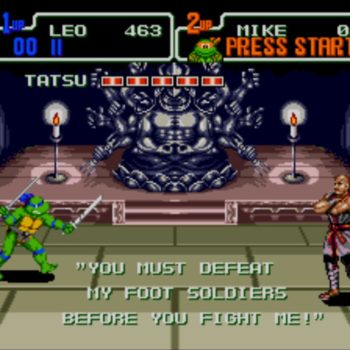 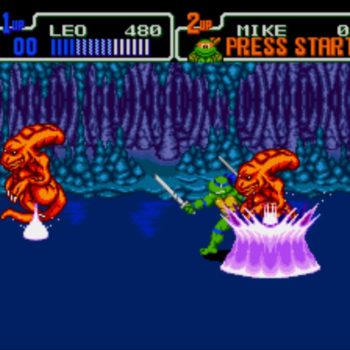 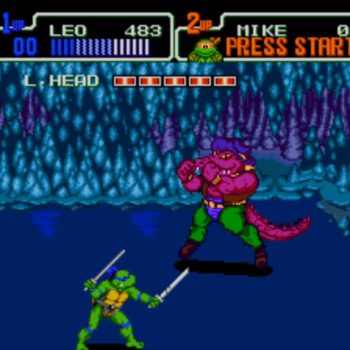 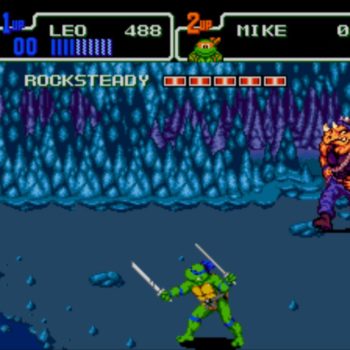 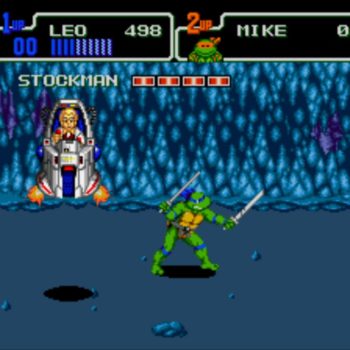 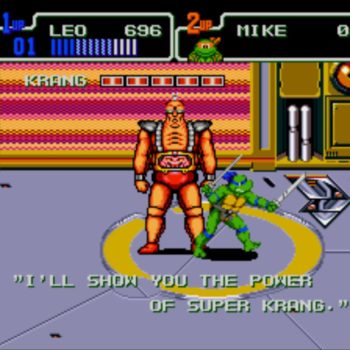 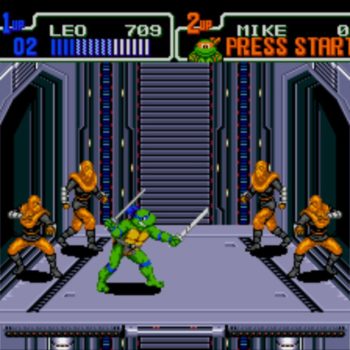 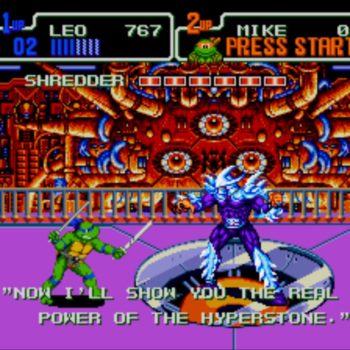 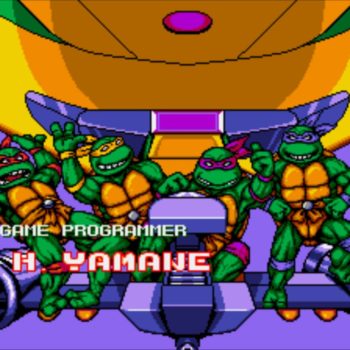