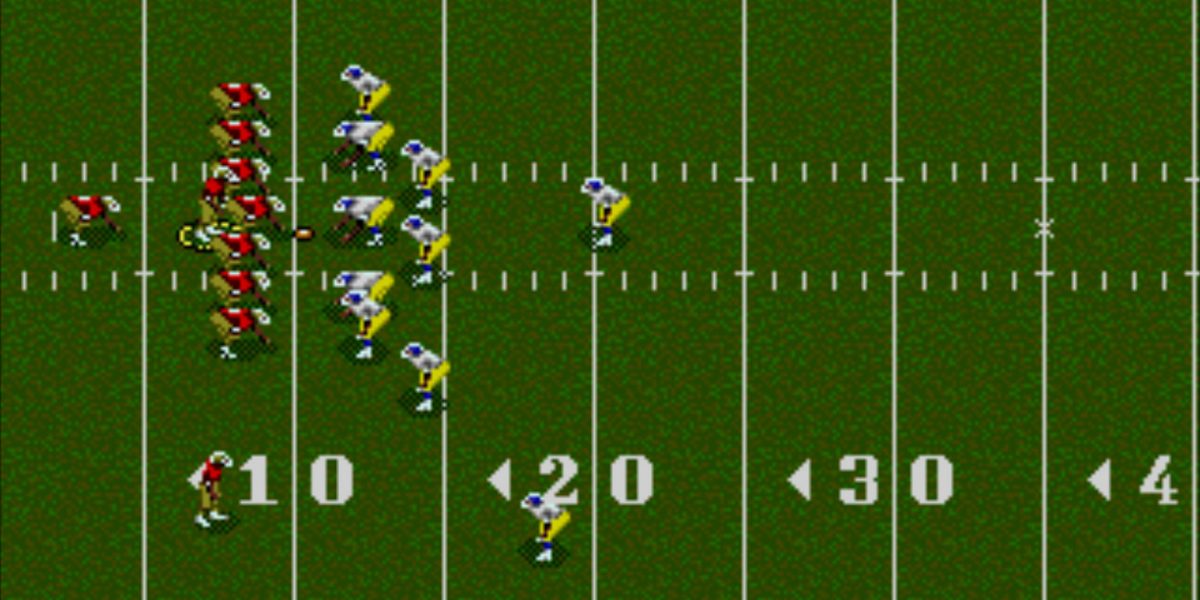 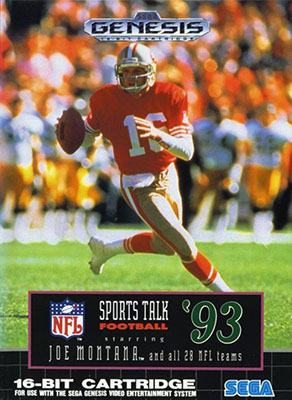 Once upon a time sports games were mundane. When the 16-bit era arrived, that all changed.

Sega led the charge against their rivals at Nintendo by investing heavily in sports games and famous celebrities and licenses. From Buster Douglas Boxing counteracting Mike Tyson’s Punchout to co-developing video games for Disney, Sega was all-in on making sure their Genesis console competed with the Super Nintendo.

One of the celebrities Sega had signed was then four-time Super Bowl champion quarterback Joe Montana. In what could be construed as an odd twist in a storyline, the original Joe Montana Football game was developed by Electronic Arts: who also developed their John Madden Football series for the Genesis after reverse engineering the console and holding Sega ransom over cartridge licensing fees.

Both companies saw their sports lines as a seasonal opportunity to sell an upgraded game. The more realistic Madden went its separate ways from the arcade-style Montana following the first rendition of those titles.

Montana would still be the headliner for this game as his career started to wind down. This game would also feature all 28 NFL teams as well as the players. You can also choose the type of field (natural, artificial or dome) and weather (including rain and snow).

The variety helped Sports Talk keep pace with Madden, but it was the revolutionary “sports talk” feature that would return for the 1993 edition of the game and take center stage once again. Featuring (from what I found) over 500 phrases, hearing commentary in a video game was still a wildly new concept back in 1992. While they are fairly generic (only Montana’s name is spoken among the players) hearing that the “Rams are in the 3-4 defense” or the “49ers are in the pro set” was trailblazing for its time.

Some of the other phrases focused on down, score, time and the weather. If you attempt to go for it on fourth and long? The announcer would belt out “I can’t believe it!”.

The play calling is a bit tedious, but has most of the formation options found in its competitors of the time.

The game play somewhat resembles Tecmo Bowl in this aspect, down to the horizontal view of the field – which can be changed to Madden’s vertical style (with the camera positioned behind the offense or defense) or a ridiculous “blimp view” which even makes my review of Madden ’95 for Game Boy look advanced by comparison!

The game itself seems fairly deep if not a bit more complicated to play than Madden. Rather than passing windows, hiking the ball with the QB asks players to cycle through receivers with B before passing to them with A – which could get you sacked or force an interception if you’re too clumsy.

Running the football? A chore!

The pacing of the game seems a bit off, as you wait… and wait… for the teams to line up. Once the play is run to the focused player, be it a running back carrying the ball or a receiver catching, the screen zooms in for a fairly detailed camera view.

I’m sure with more time the game can really get addicting and become yet another football title to master. The sports talk feature firmly supplanted Sega and its Sega Sports line as a force to be reckoned with in the 16-bit console wars. This is definitely a title that anyone with a retro football itch should check out especially when comparing it to other games of its era. 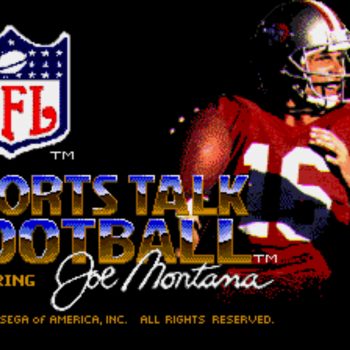 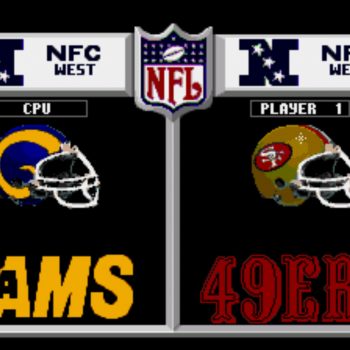 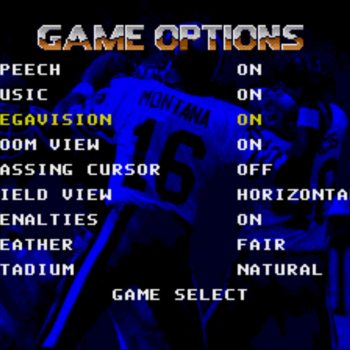 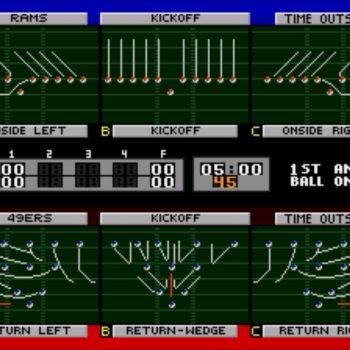 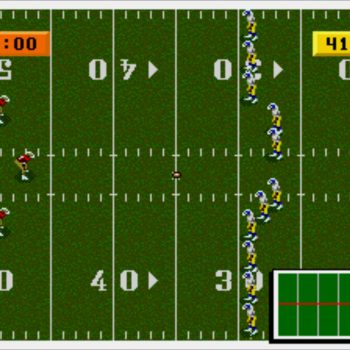 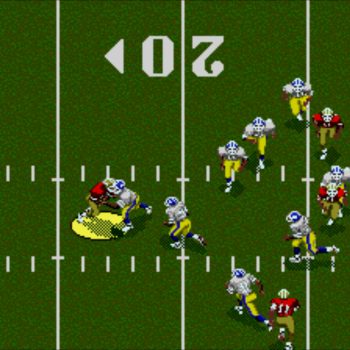 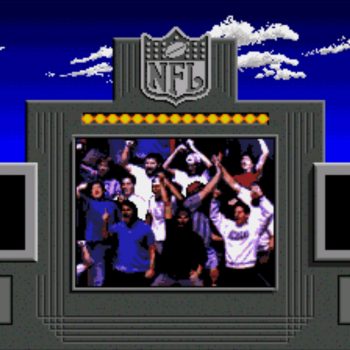 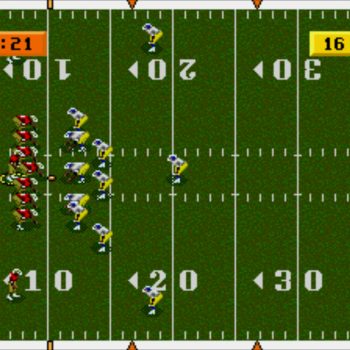 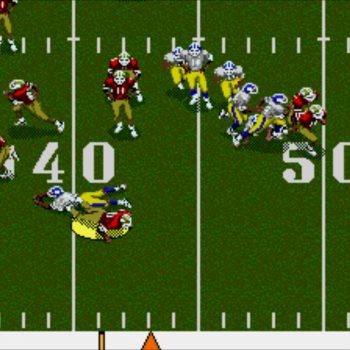 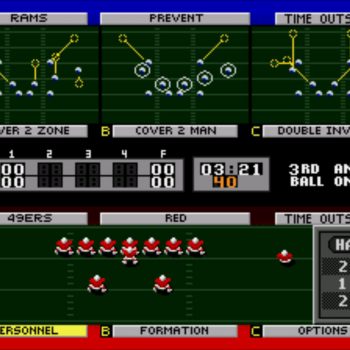 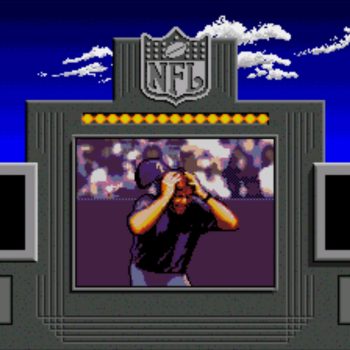 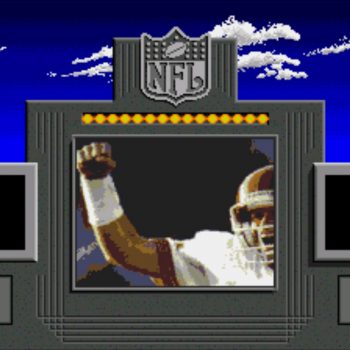 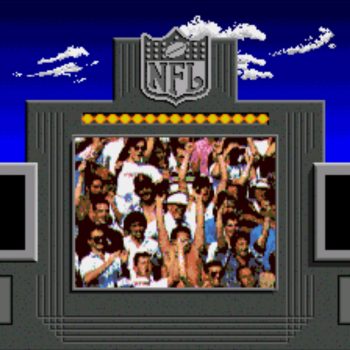 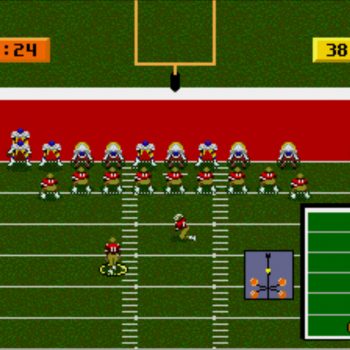 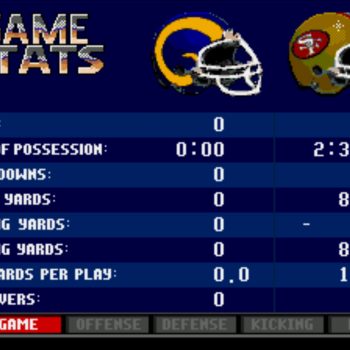 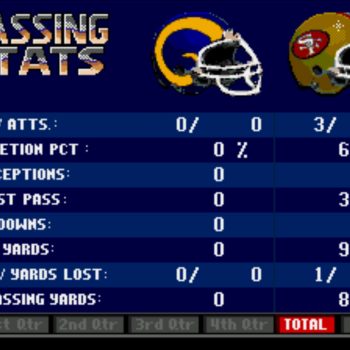 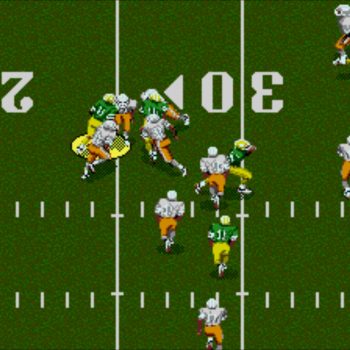 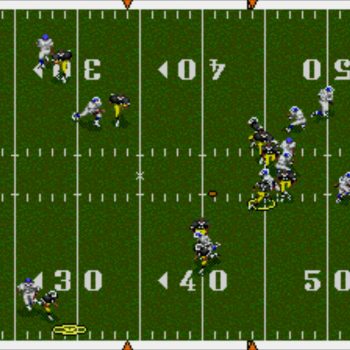 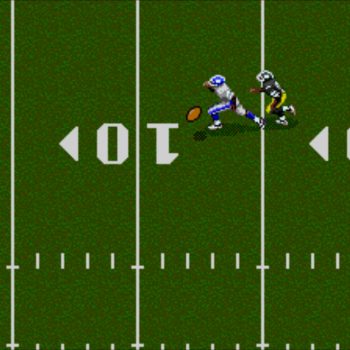 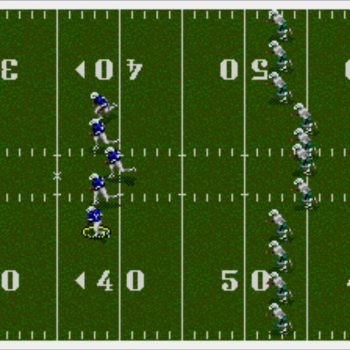 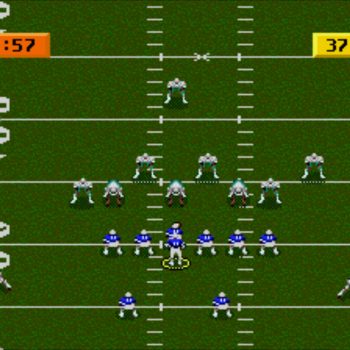 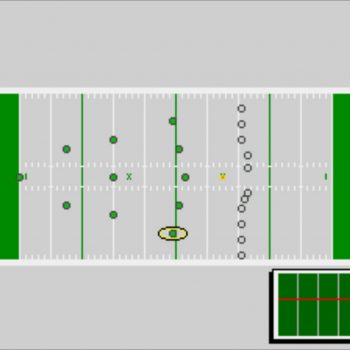 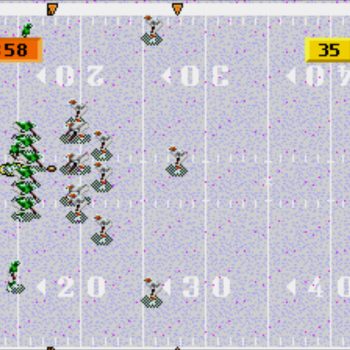